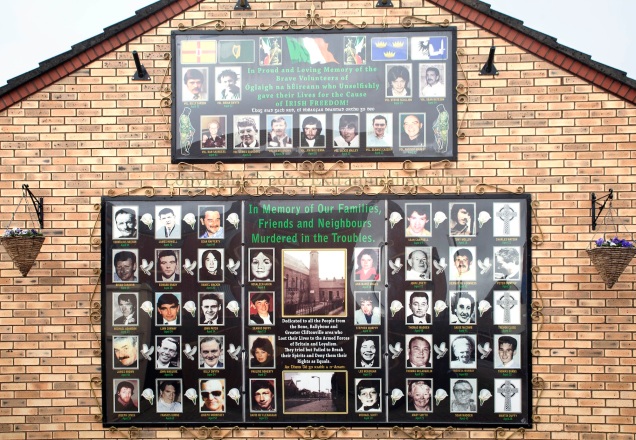 Two memorial boards in Clós Ard An Lao/Ardilea Close, one to volunteers and the other to victims of violence, from the surrounding areas, the Bone, Ballybone and Cliftonville.
The text on the first read, “In proud and loving memory of the brave volunteers of Óglaigh na hÉireann who unselfishly gave their lives for the cause of Irish freedom. Thug siad gach rub, ní bheanfar dearmad orthu go beo.”
The second read, “In memory of our families, friends and neighbours murdered in the troubles. Dedicated to all the people from the Bone, Ballybone and greater Cliftonville area who lost their lives to the armed forces of Britain and Loyalism. They tried but failed to break their spirits and deny them their rights as equals. Ar dheis Dé go raibh a n-anam.”
Involves wrought iron pieces as borders.
Click and click again to enlarge (to 2000 x 1385)
Copyright © 2013 Extramural Activity
Camera Settings: f8, 1/250, ISO 200, full size 5407 x 3744
X01067