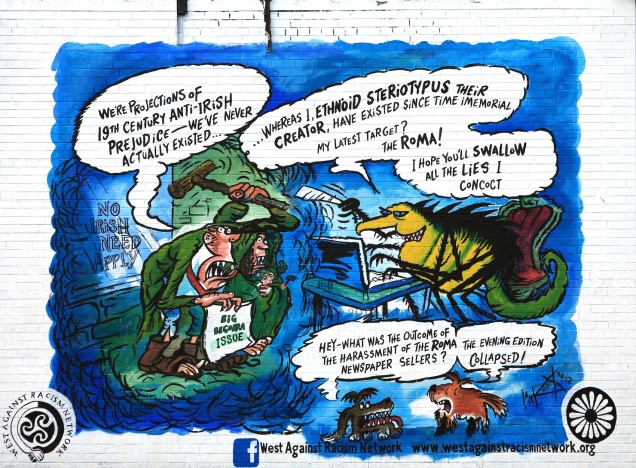 The new mural on the international wall, in the style of Punch (and other) magazines’ portrayal of the Irish.

The Punch portrayal is described, and Punch named explicitly, in the song ‘Do Me Justice’ a.k.a. ‘Here I Am From Donegal’ Click for Lyrics. Audio: Frank Harte (full song) | Len Graham (clip)

WP entry on the Roma

“The Big Begorra” is a play on The Big Issue, a newspaper published on behalf of, and sold by, homeless people.

This mural does NOT contain a reference to the ‘Free Marian Price’ (WP | FB) campaign, which all of the other murals on the international wall currently (summer 2012) do. It is also sponsored, has an artist’s signature (political cartoonist Ian Knox, a.k.a. Blotski (WP) – pictures of the launch) and date (9 August, 2012 – for Féile 2012) and it has social network tags.