The RUC station stood at the junction of the Glen Road and Falls Road, at the northern end of Andersonstown, in republican west Belfast.

For the early history of the area (the Ballycranocke townland), see this article by Pól Deeds. The map below from roughly the 1860s (from PRONI) shows the location of Callender’s Fort, possibly the site of the eponymous crannóg. The junction of the Glen Road and Falls Road is on the right. Andersonstown was Anderson’s Town only twenty years previously. The Anderson in question is unknown; he is presumed to have been a lowland Scot who emigrated to Ireland (PlaceNamesNI).

With the Troubles, the station was fenced in, including the car-park in front. 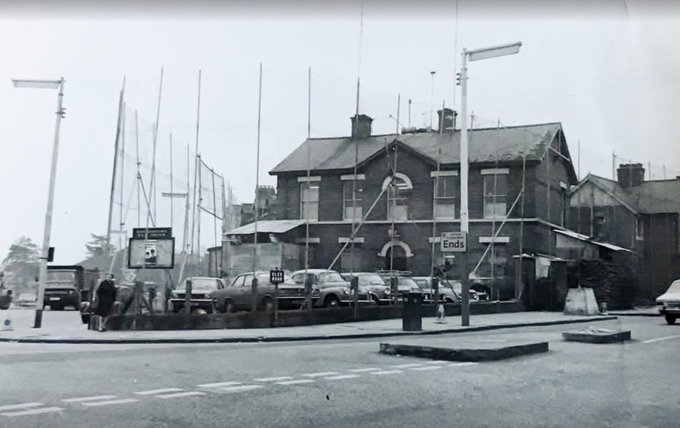 Over time, the station increasingly came to look like a fortress. Here it is in 1976, with corrugated metal plates, perhaps as a hoarding for the poles being put in place for more permanent fencing. There is an observation post at the point. 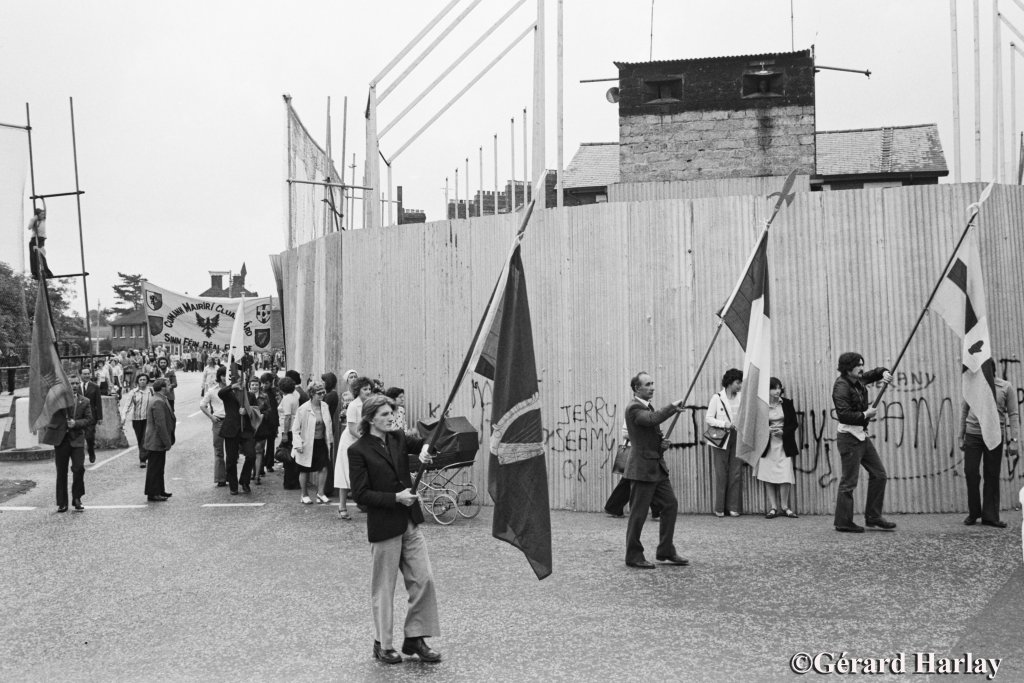 (From the recently-discovered collection of French photographer, Gérard Harlay. Bobby Sands is in the foreground.)

In this image from 1979, the fencing has been completed.

(1979_0365 Copyright Klaus Fröhlich, used by permission)
(See also this youtube footage of the cortège at Bobby Sands’s funeral (in 1981) passing the station).

In 1983 the station was bombed by a 1,000 lb bomb and took one million pounds to repair (Deeds). When it was rebuilt, the station-building itself was almost invisible, completely enclosed on all sides by a high wall topped by a solid metal barrier, itself topped by fencing. Inside, there were lookout posts and surveillance equipment. All of these were indicators of the animosity the station engendered in the local population.

After the peace, the station was slated for removal. “Fágaigí An Bealach Ag Slóite Na bhFiann [Leave ye the road to the young warriors]” graffiti was painted on the Glen Road side of the station in 2005 (J2365) – the graffitist was arrested.

The station was demolished in 2005. 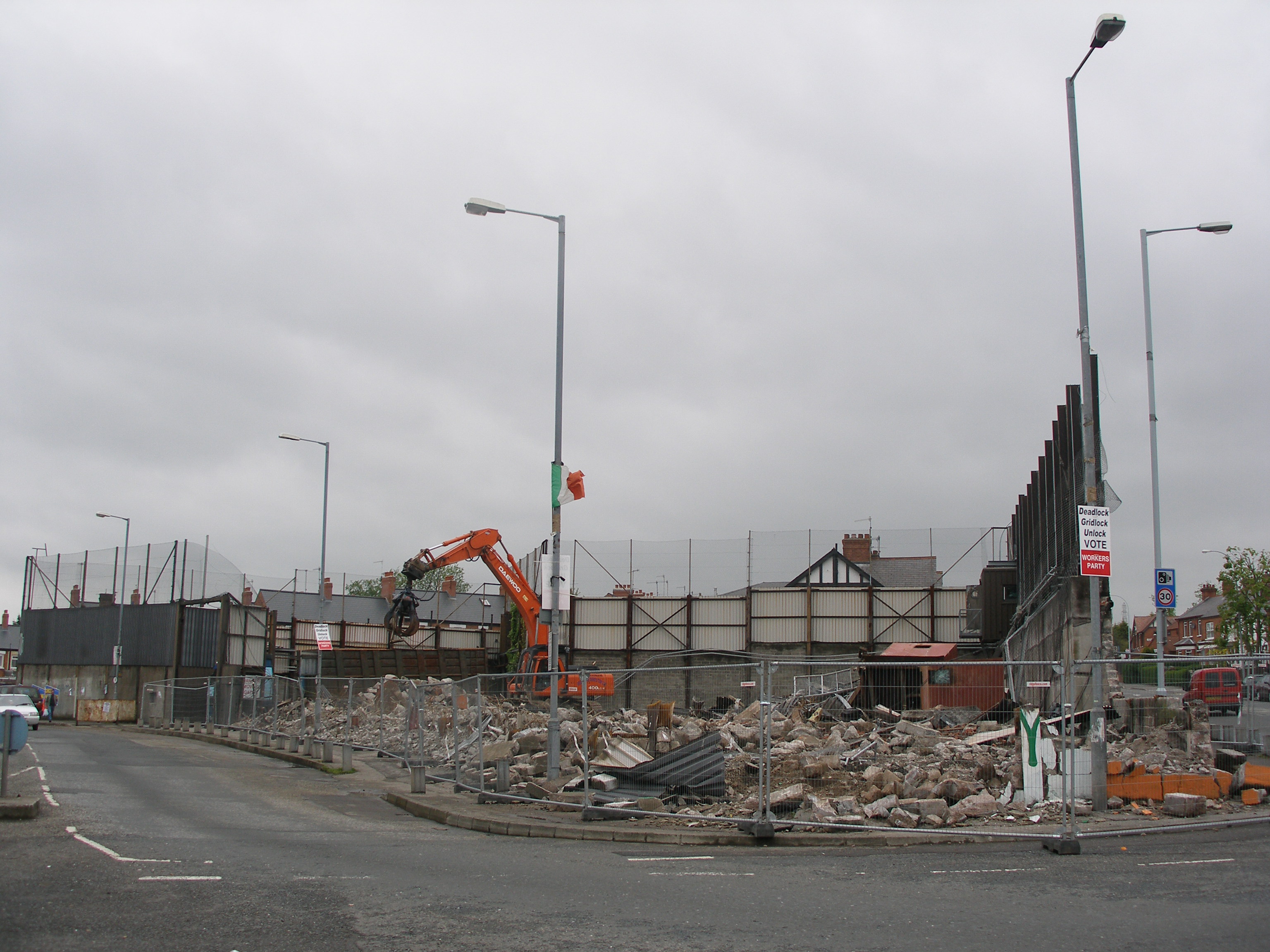 (Unattributed X09261. Bobbie Hanvey’s collection contains some images of the last occupants and the station in demolition.)

The site was put up for sale (Irish Times) to private developers. The site, however, was so deeply etched into the consciousness of the locals that it belonged, psychologically, to them (see e.g. this SF press release). The ‘Stop The Sell-Off’ campaign was launched, aimed in particular at then-minister for Social Development (DSD) Margaret Ritchie of the SDLP.

The site itself, now paved over, was used for the campaign. There had been a few pieces on the wall in 2006 but the campaign about the site’s future turned the wall into a site for murals and boards from then on.

Five of the panels on the upper part of the wall were used for this campaign. In the image below, these are “DSD stop the spin”, “Public land for public use”, “Give us back our land”, “Stop the sell-off campaign”, and “Cuir deireadh leis an díoladh.” By October of 2007, Carvill had withdrawn their plans.

The upper/right wall in 2008. Glen Road is to the right of frame.

The campaign went on to have the site turned over to the community (Gerry Adams’s blog). There were plans for a “West Belfast Expo Centre” but the competition fizzled out and was replaced by DSD plans for a green space (Architects’ Journal). The wall was still used for CNR boards and murals. Here is the upper wall in 2011:

The site’s development as a park was begun in 2012. The tarmac was torn up and grass planted; around the edge hedge saplings were planted. In subsequent years, trees were added to the interior and a low fence around the perimeter.

The area was renamed Groves-Reilly Corner in January 2019, in honour of activists Emma Groves and Clara Reilly who campaigned for decades against plastic bullets (Groves was blinded in 1972 by a plastic bullet fire by a Paratrooper) and were founder members of Relatives For Justice (web).

The Wall Across Time

Lower/Left wall:
#1 (Two panels of the wall but they have always been treated as one. This is the ‘Sinn Féin’ spot. It is by far the busiest spot on the site, as it is used annually for marches commemorating 1916 and the 1981 hunger strike and in between those times serves as a Sinn Féin noticeboard.) 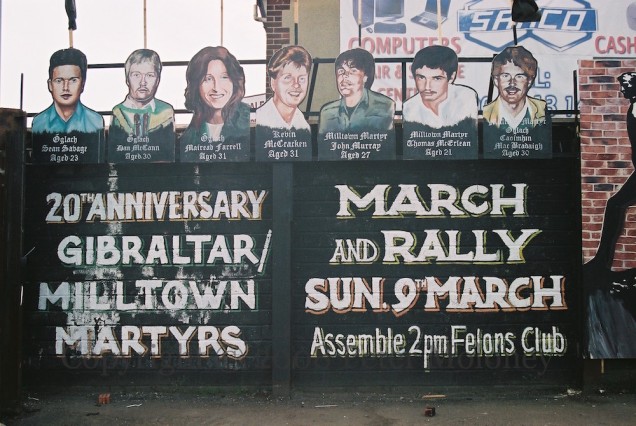 [A hoarding is erected in front of the wall.] 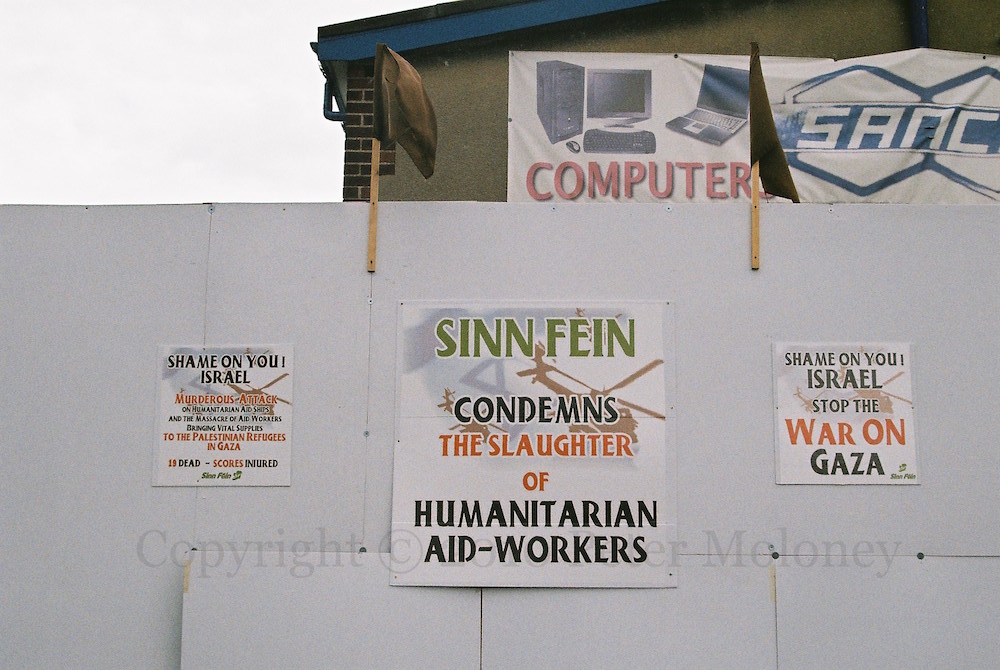 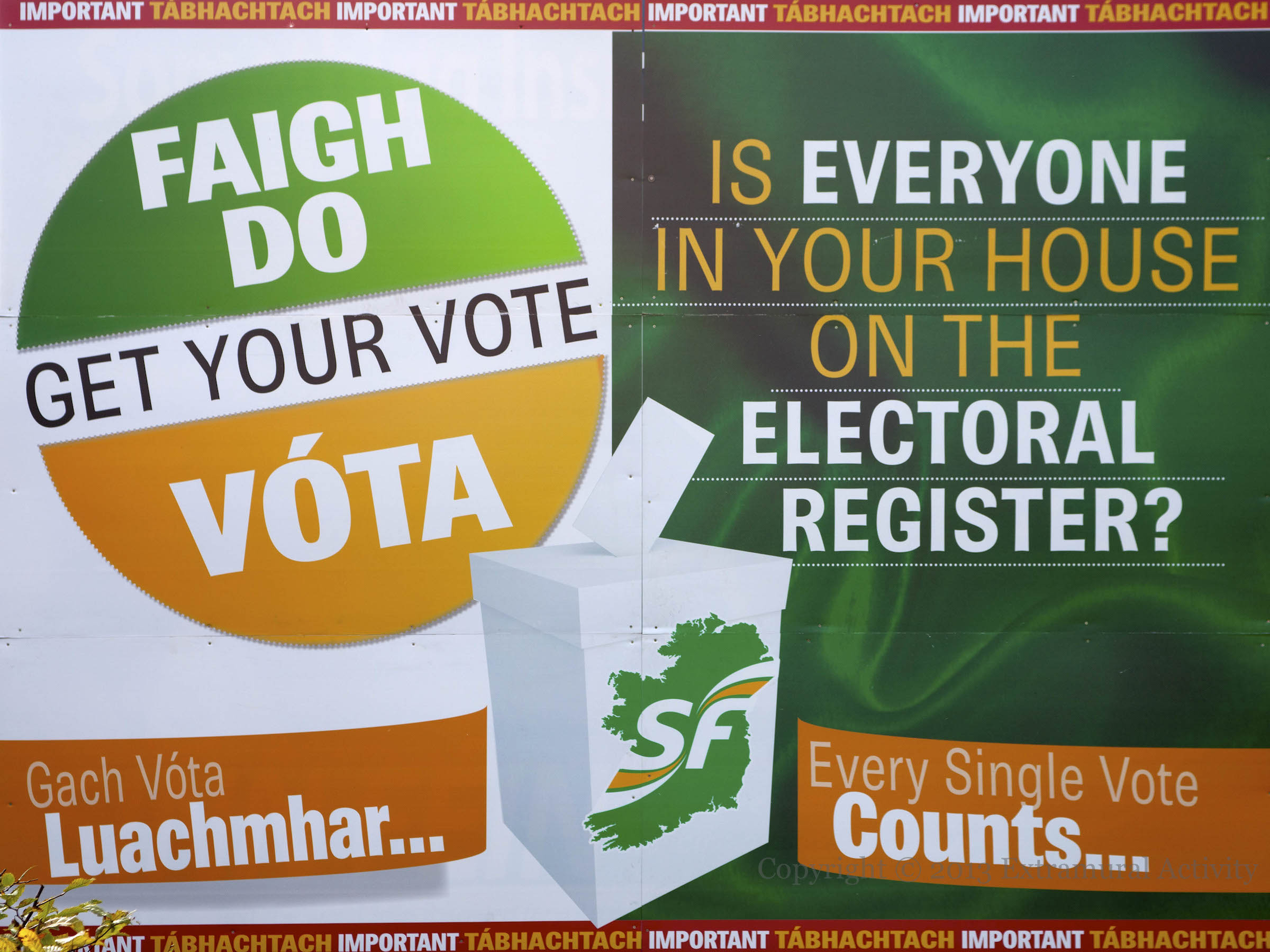 2014 – Standing Together Against Racism

2015 – Cherish All The Children Of The Nation Equally 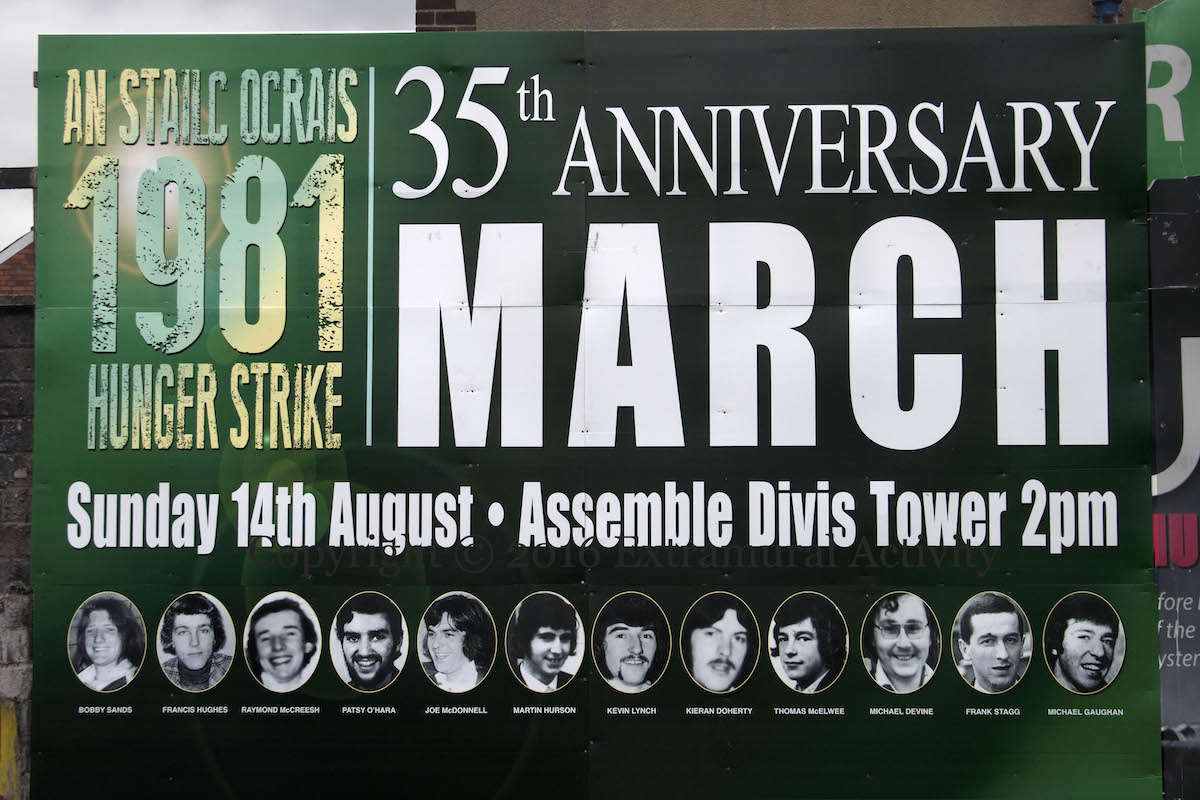 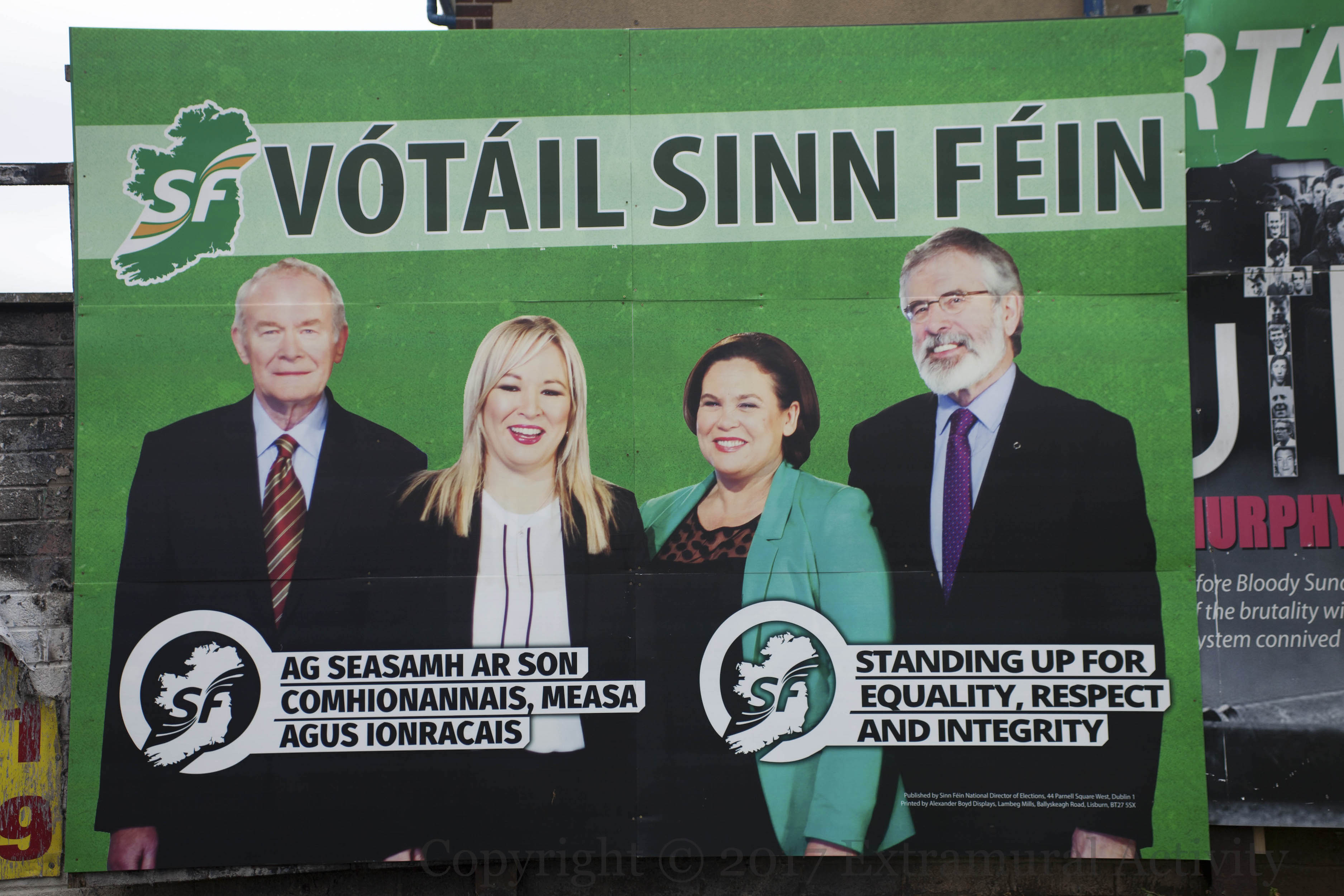 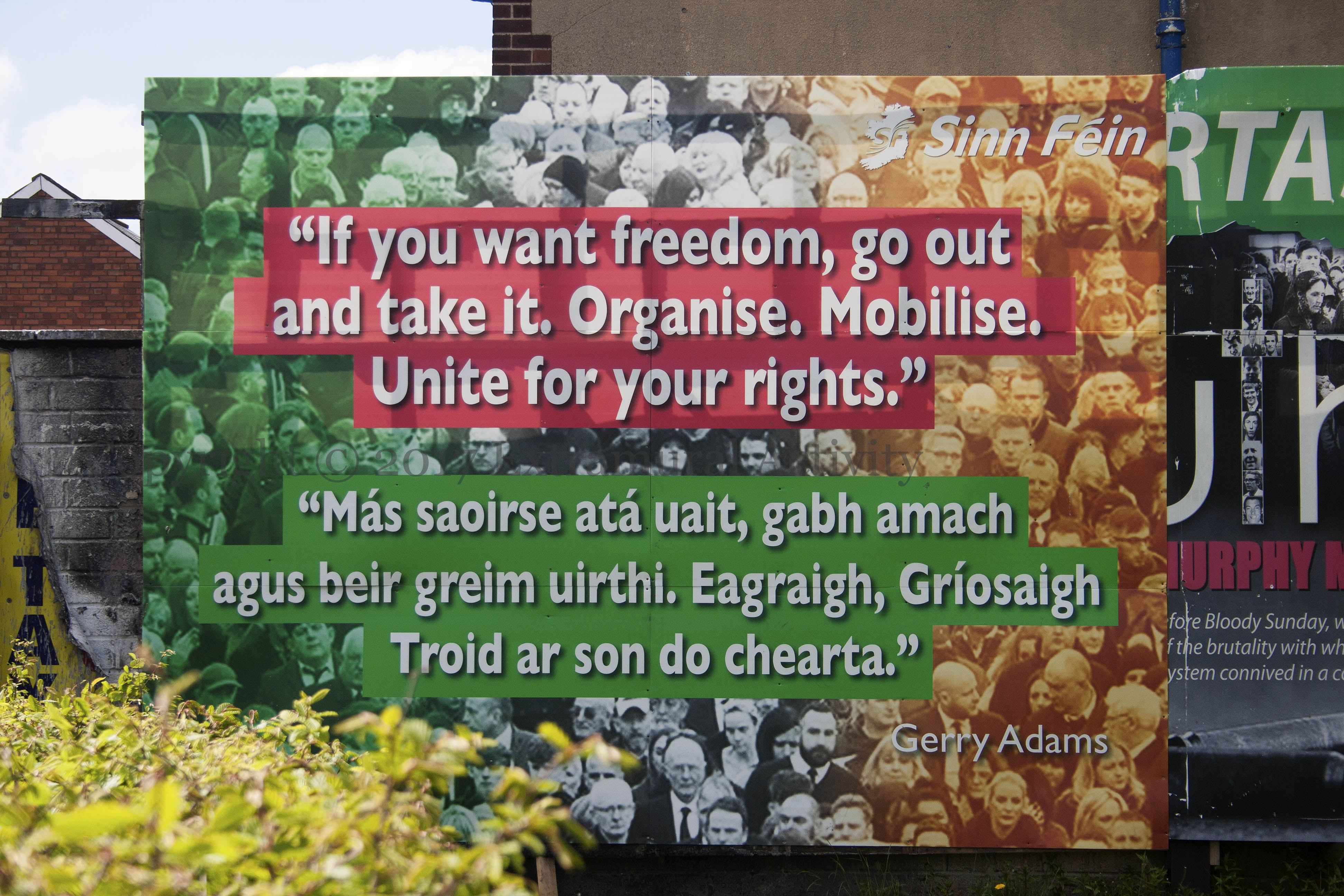 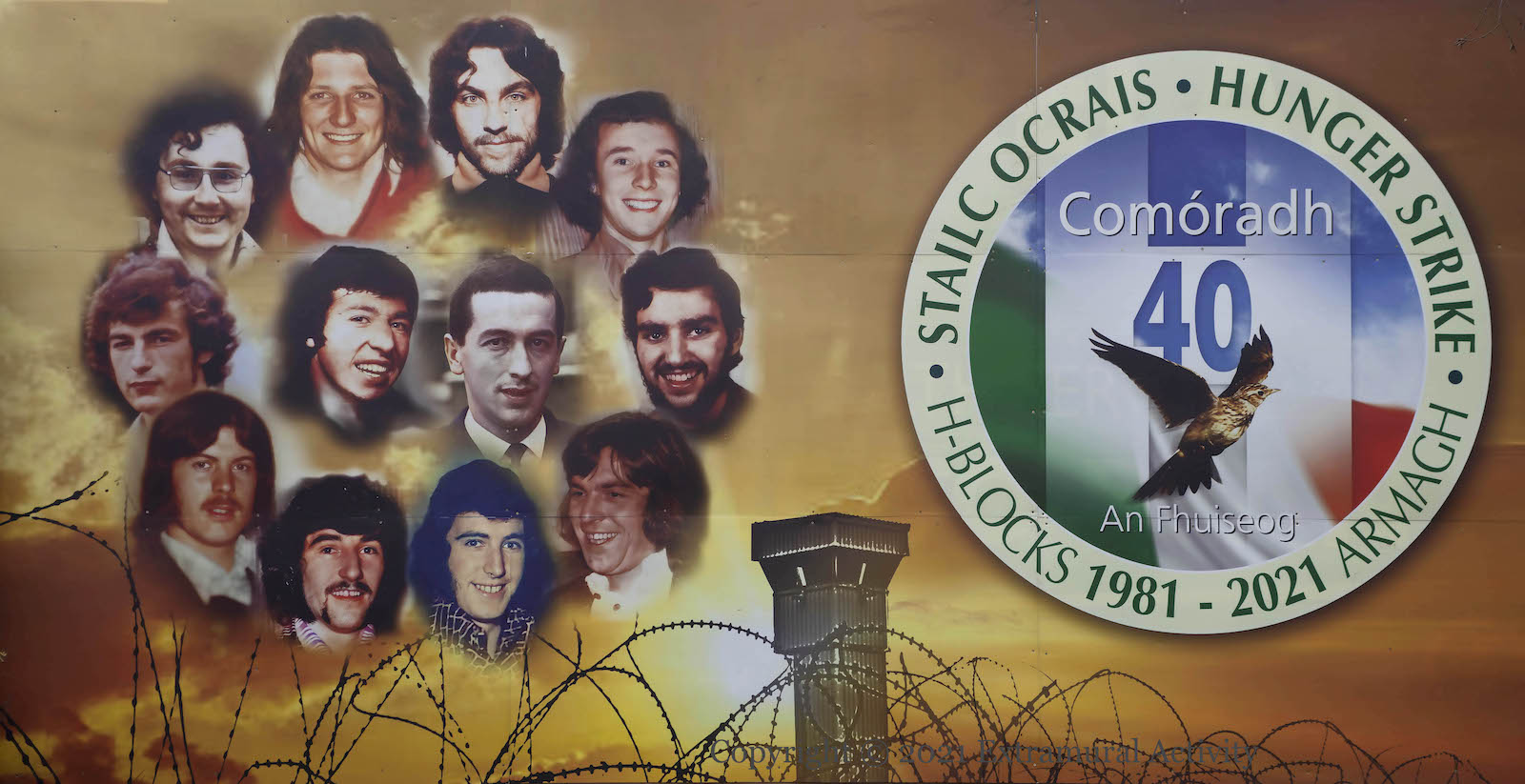 #2
2006 – Revolutionary Party small board on the block wall

2008 – I nDíl Cuimhne Gibraltar on hoarding 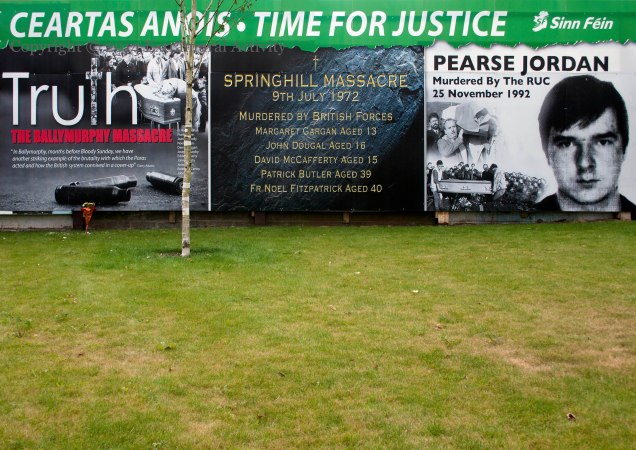 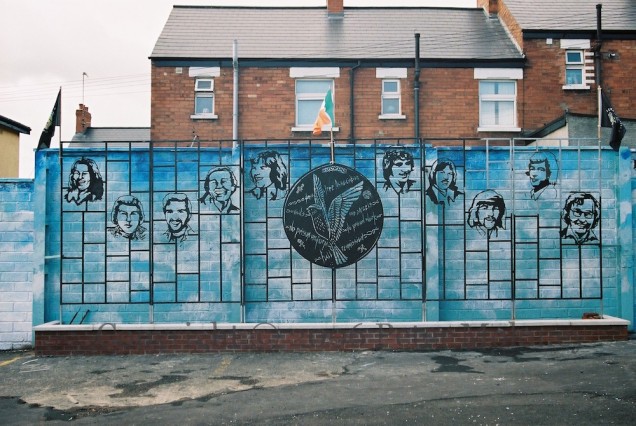 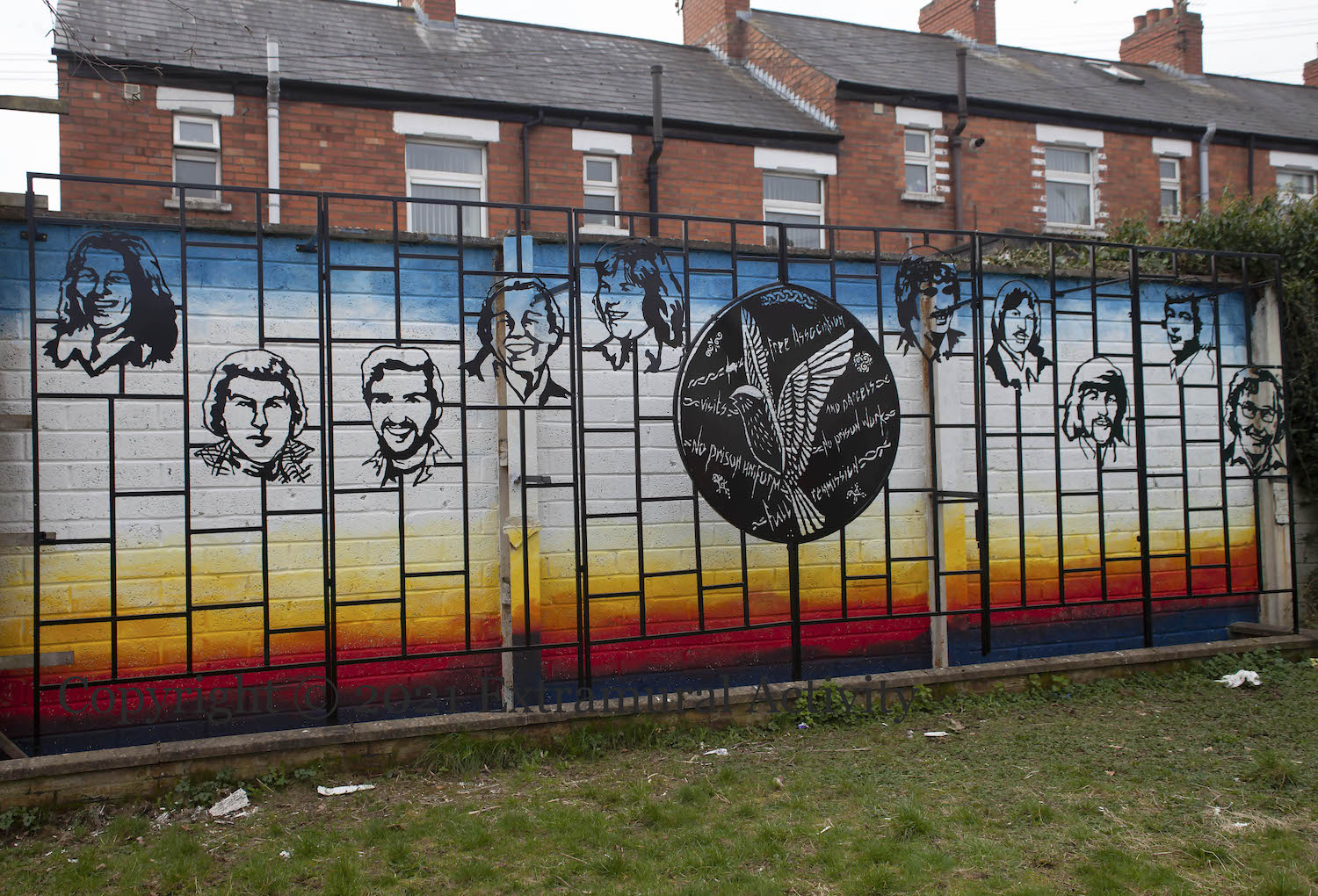 #4
mostly graffiti in the early years

Middle Wall:
#5
The middle wall was a for a long time something of an eye-sore, covered most of the time in wild-style writing. Circa 2010, this Fianna Éireann board was mounted in the middle of the writing:

And 2015 the whole was painted over for IRPWA stencils. Graffiti artists soon returned.

This Fianna/Ógra banner was hung in January 2016 to cover the whole wall. 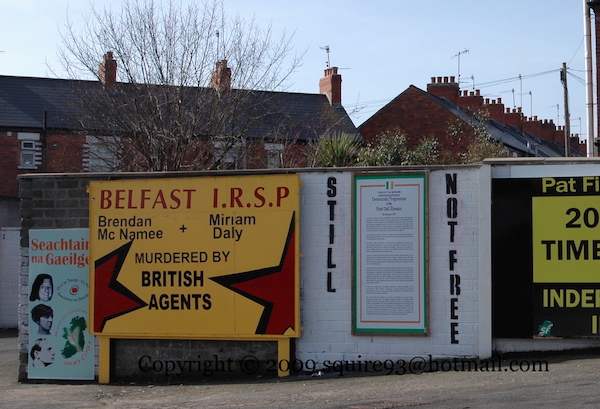 There has been “Free Marian Price” graffiti in this spot since 2012. 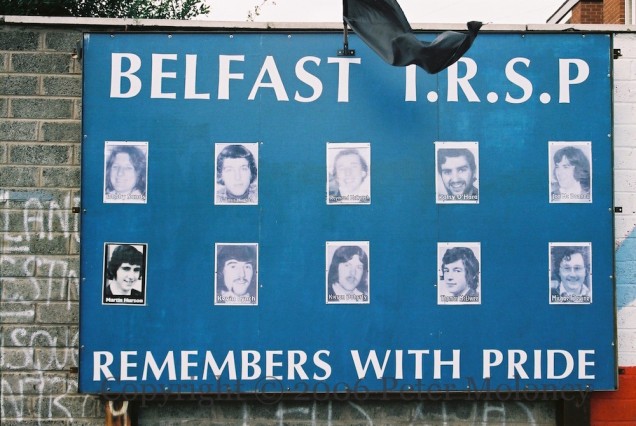 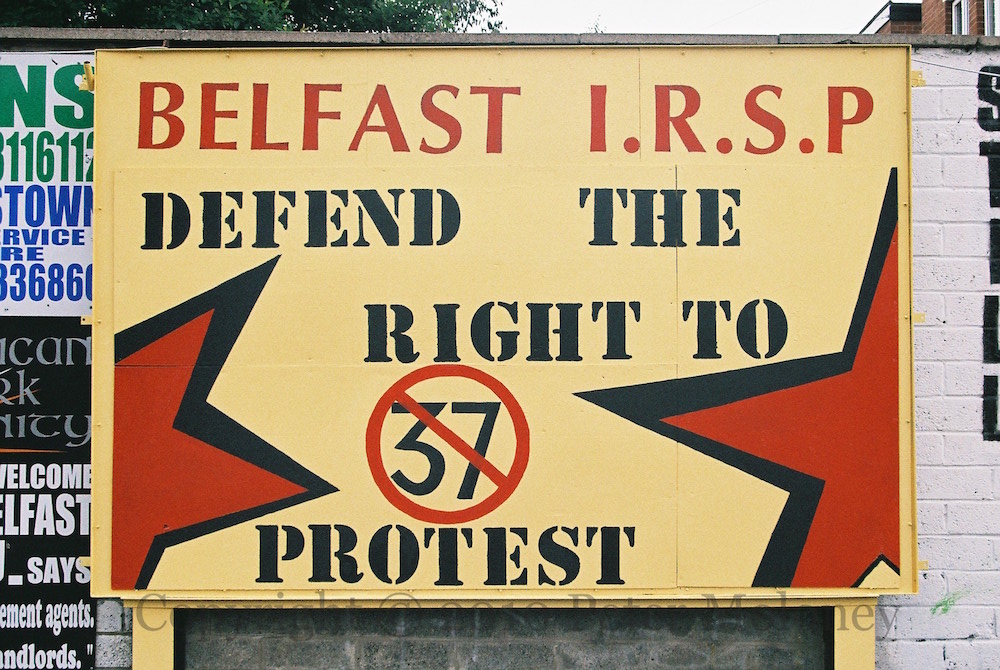 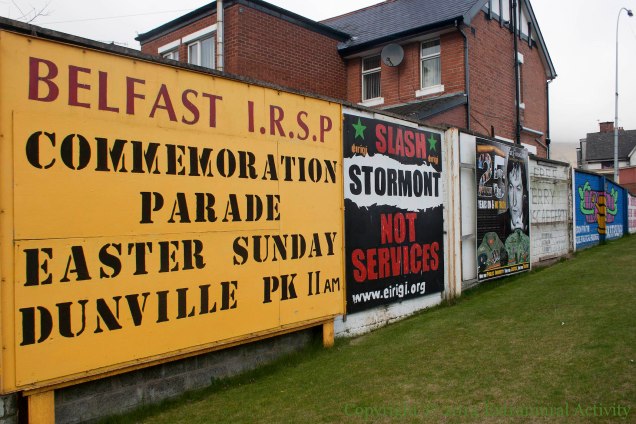 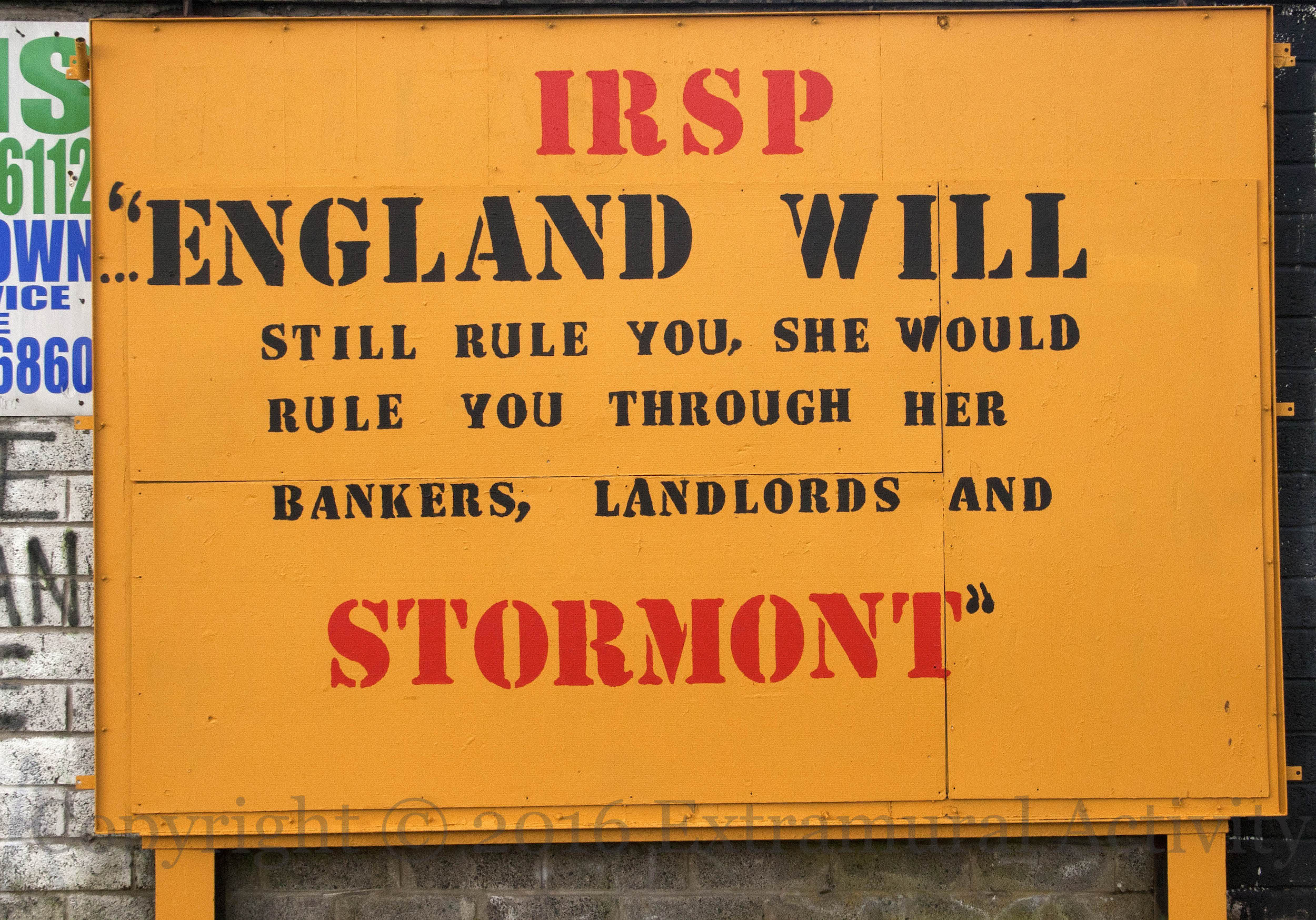 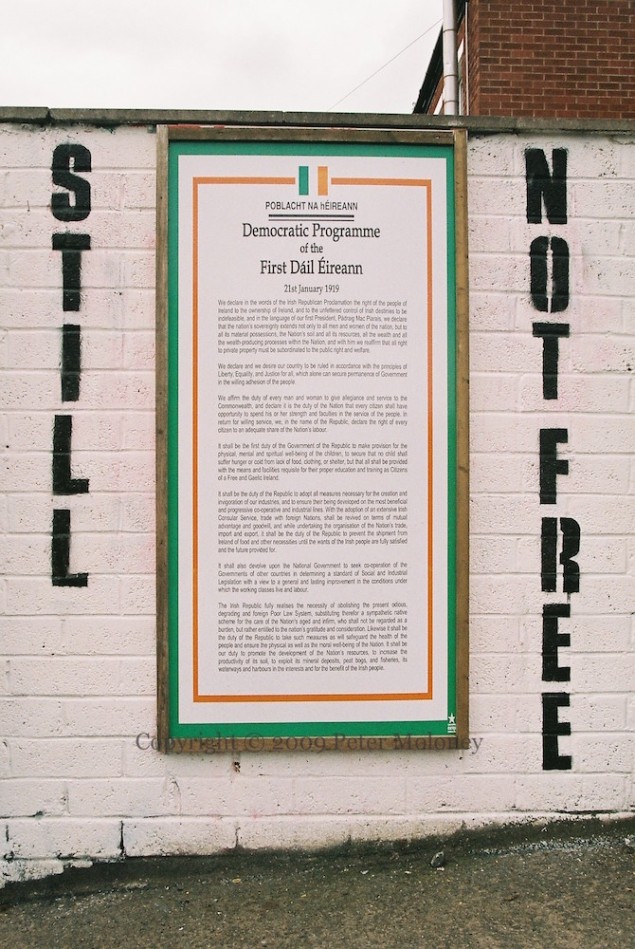 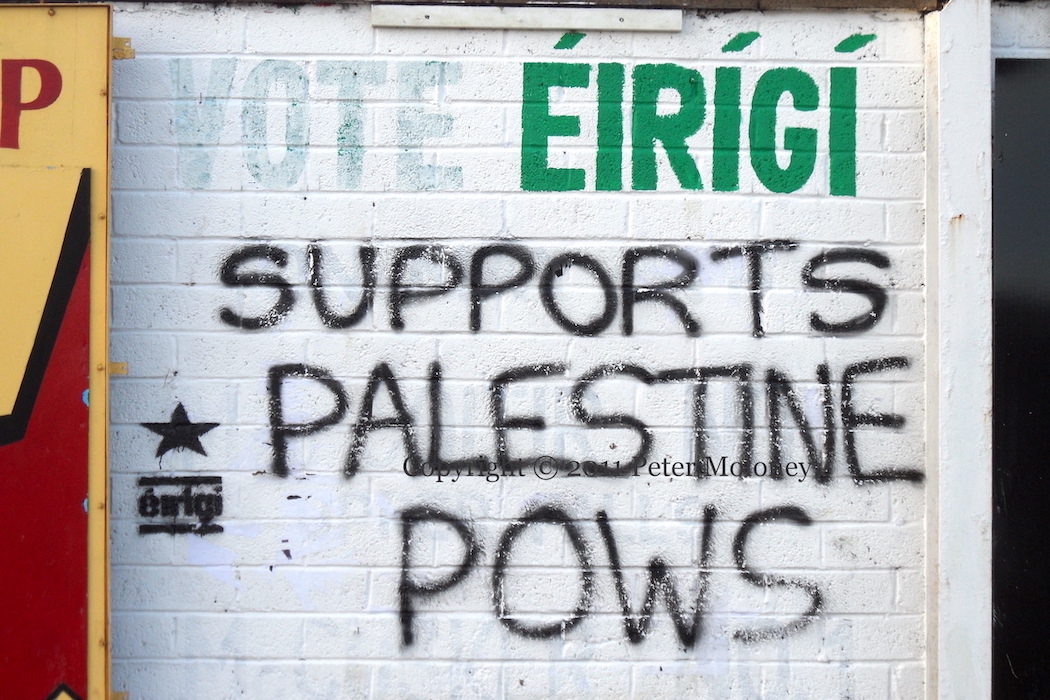 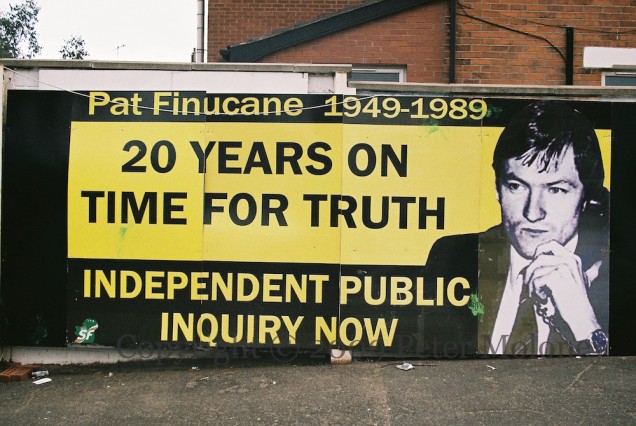 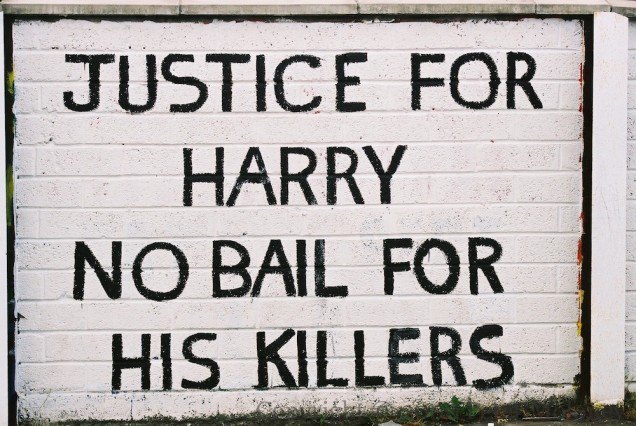 The Askatasuna mural was repainted in 2016, taking up an additional panel to the left (#10) and the final panel (#13)

Back to the index of Visual History pages.