Skip to content
What has come to be called “The Jackson Mural” depicts scenes from the Williamite campaign in Ireland from 1688 to 1690, with the left-hand panel showing King William III Of Orange crossing the Boyne and the right-hand panel showing the Relief Of Derry.
There are in fact multiple murals (or at least, multiple versions of the same mural) and multiple generations of painters called “Bobby Jackson”.
The mural was originally painted in the 1920s (Loftus 1983 gives 1926 as the year) or 1940s (Woods 1995) in Clarence Place by Bobby Jackson (senior), a resident of the old Fountain area (perhaps of Clarence Place itself – a 1957 directory lists a Robert Jackson at 3 Clarence Place). (It is not known when Jackson Jr began working on the mural. It is reported that he helped his father with the Lundy effigy in the 1930s, so it is possible that he worked on the mural from the beginning.)
The mural was on the cul-de-sac wall in Clarence Place, below Fountain Street. (Nowadays, only a single block of Fountain Street remains, running from Carlisle Road to Hawkin Street (previously Hawkins Street), but it previously ran all the way from Bishop Street to Bridge St (and later, in the 1900s, Orchard Street continued east from Fountain Street and Carlisle Road was added going south from the same junction as Fountain Street and Bridge Street.) (For another early mural by Jackson, of King Billy landing at Carrickfergus, see Visual History 01.)
This Londonderry Sentinel article paints a vivid picture of the (old) area and of the loyalist imagery within it. The image below (a photograph on the railing outside Cathedral Youth Club) shows the people of the old Fountain area beneath an Orange arch and bunting in Wapping Lane.

(X02840)
The image below – also of a photograph on the youth club railings – shows Jackson in front of the original mural, (Whether this is while the mural was in its original or second location is not known – black & white photography was still common in the 1970s.) 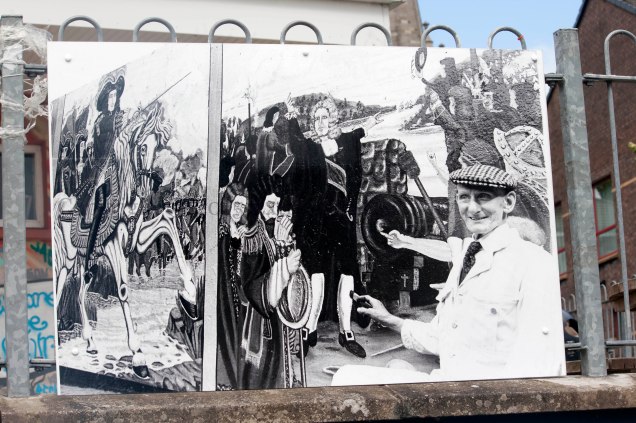 (X02841)
The ‘Streets Of Yesteryear’ mural shows (at top) Bobby Jackson painting the mural and, at right, the mural in Clarence Place. On the left is Wapping Lane, where the photograph of the kids in front of the arch (above) was taken. The plaque at right reads “Unveiled on 7th August 2009 by Mrs. B. Holland (née Jackson) daughter of the late Bobby Jackson”. 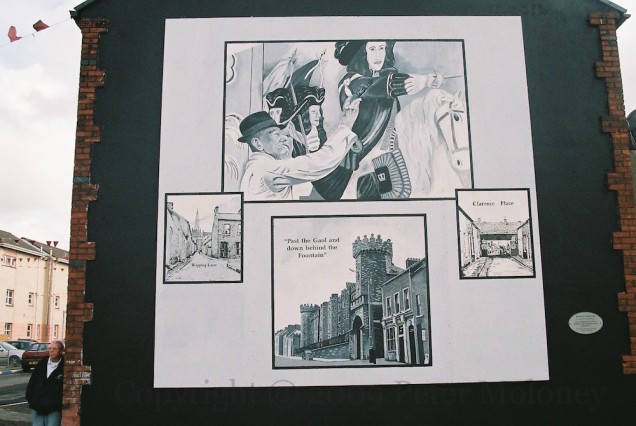 (M05296)
The mural on the original Jackson wall in its original location at the blind end of Clarence Place. The viewer’s back is towards the city walls and the viewer is looking south. 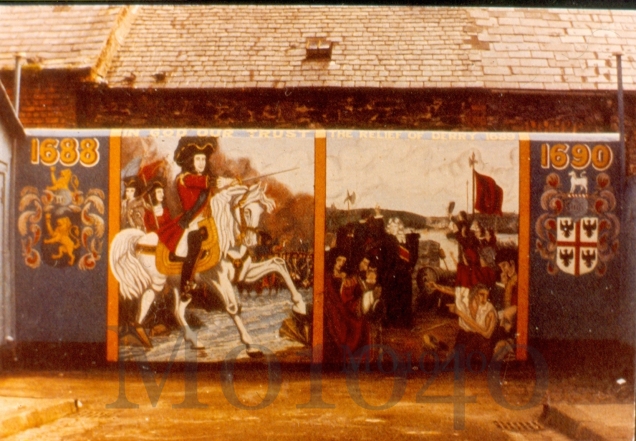 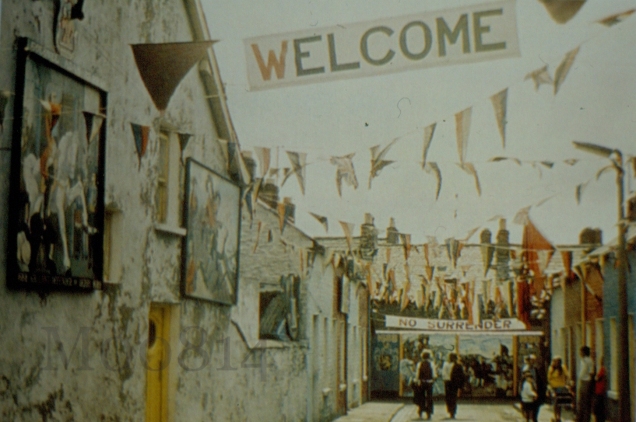 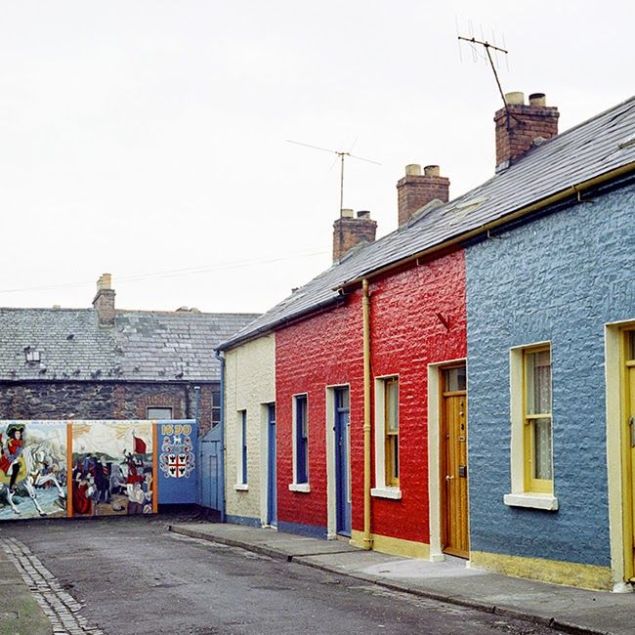 (M00063)
Victor Patterson has an image of the two main panels from 1977-08.
In the 1970s the area was redeveloped and the mural, which Jackson and his son, Bobby Jackson Jr, would touch up annually, was threatened with demolition. At the insistence of local people it was moved. (See p. 11 of Oona Woods’s book Seeing Is Believing.) As Jackson Jr describes (p. 7; relevant excerpt available at CAIN): “The only reason that one is still there is because my father wouldn’t move house at the time they were renovating the old street, he wouldn’t move house until they moved the picture to beside where he was going to stay. So they decided they were going to do that and that’s how it got up there. Well, it’s the last of the old Fountain, it’s the only bit you could really say is the Fountain, that wall.” (He perhaps moved to 16 Fountain Street.)
Here is the original Jackson wall in its second location, in 1990. The viewer is now looking north, towards the flats (which would themselves be demolished in the 1990s) and the city walls.

(M00813)
The mural was threatened again by redevelopment in the 1990s and this time, because the wall itself was decaying, it was destroyed (in 1993) and a ‘memorial’ wall created with a new, very similar, mural painted on boards in 1995. (There are images by Victor Patterson from 1977 – one | two – and 1978, and by David Mansell in 1979 of Jackson Sr in advanced years. So, the 1995 boards were probably painted by Jackson Jr, though we do not have a date of death for Jackson Sr.)

(The memorial plaque in the side of the wall, the right-hand side of the image just above. M11313)
Bobby Jackson Jr. continued to update the mural, which is displayed only during the parade season, though, as he says, “If I had my way we would change the paintings, move it all around, do something else, because these boys already have these ones out on cards. I want to do something else. My son says, “You can’t, you must stick to the original ones.”” (p. 8)
Jackson Jr. died in 2016 (Londonderry Sentinel). The article includes an (undated) photograph of Jackson Sr. on the left and Jackson Jr. on the right. It is not known who now mounts the boards each summer – perhaps it is the son mentioned in the quote above – and whether the boards are re-touched each year.
Please comment below or get in touch by e-mail (extramuralactivity@gmail.com) if you can correct or expand on the information on this page.