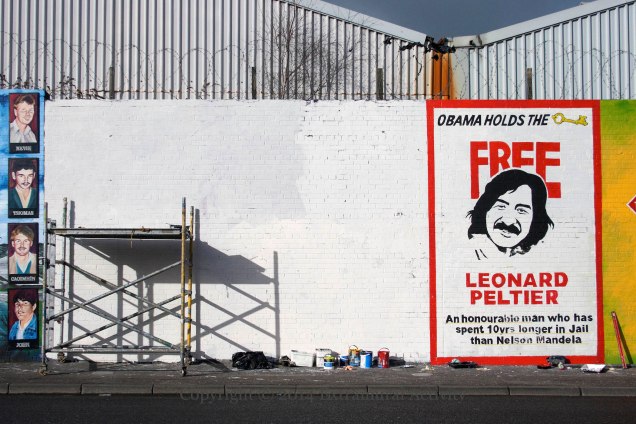 There are two new pieces on the International Wall on Divis Street. The first is the “Free Leonard Peltier” bookmark-sized piece shown in progress, above, and completed, below. (The second is a 40th anniversary piece concerning the burning of Long Kesh. We will have the finished version of that tomorrow. The two together take the place of the 2007 Guernica mural, which was in bad shape after six and a half years.) The text reads, “An honourable man who has spent 10yrs longer in jail than Nelson Mandela”. Peltier has been in jail since 1977, convicted of killing two FBI agents (WP).
Click and click again to enlarge (to 2100 x 1400)
Copyright © 2014 Extramural Activity
Camera Settings: f8, 1/2500, ISO 400, full size 3888 x 2592

One thought on “Obama Holds The Key”