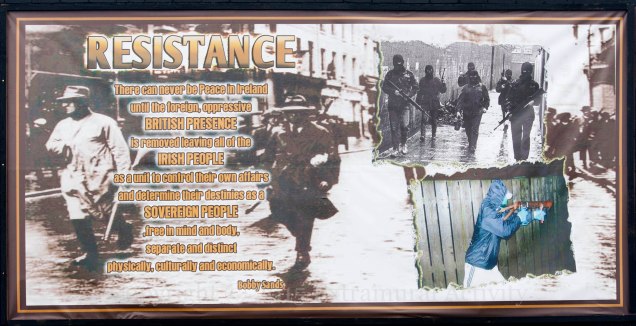 New (2015-04-04) board on Ardoyne Road showing a scene from Grafton Street in the Battle Of Dublin in the civil war (1922) (irishhistory.blogspot.com), with in-sets featuring PIRA volunteers on patrol in 1987 (belfasttelegraph), and a home-made rocket-launcher used in a 2014 attack on police (see, e.g. irishmirror.ie). “There can never be peace in Ireland until the foreign, oppressive British presence is removed leaving all of the Irish people as a unit to control their own affairs and determine their destinies as a sovereign people, free in mind and body, separate and distinct physically, culturally and economically.” Bobby Sands
Click and click again to enlarge (to full size)
Copyright © 2015 Extramural Activity
Camera Settings: f8, 1/40, ISO 400, full size
text: X02585 provisional ira