This memorial, which includes two stones, a glassed-in set of portraits of Derry Brigade members (second image), tricoloured railing and flag, commemorates the death of IRA volunteer Seamus Bradley. The stone on the right says that he was killed on active service, but the central headstone (third image) tells the story of an unarmed Bradley trying to distract the attention of British Army soldiers attacking people at the Creggan shops. To the right of the memorial is an extensive board of photographs and information relating to the treatment Bradley received, similar to the collection in front of the Operation Motorman mural in Rossville Street. (The oval plaque was on the wall of the Creggan Neighbourhood Centre before it was demolished in 2013. (CAIN))
Click and click again to enlarge (to 3000 x 2000)
Copyright © 2016 Extramural Activity
Camera Settings: f13, 1/320, ISO 400, full size 3888 x 2592 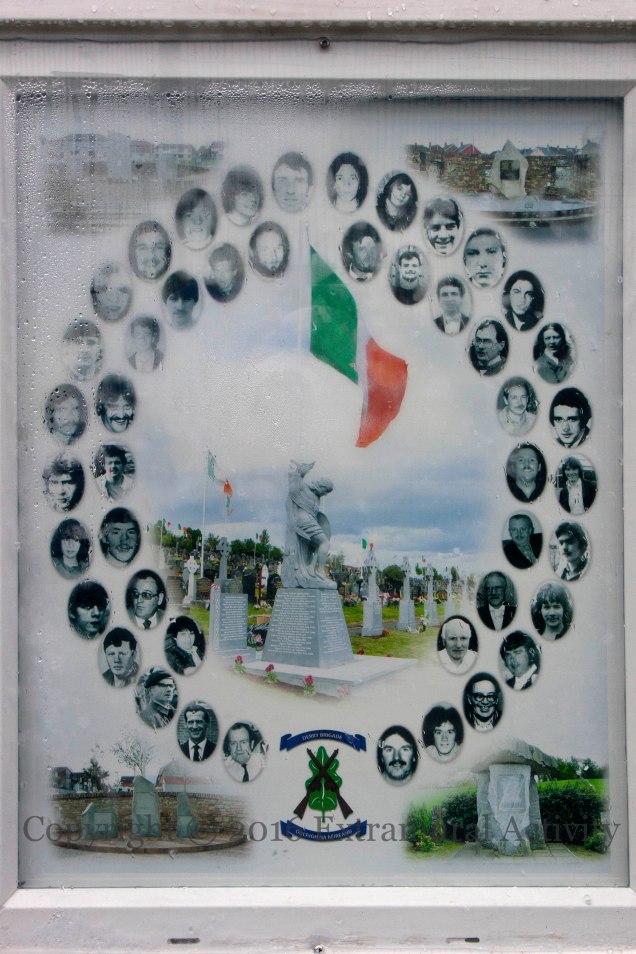 On the 4th of July 1972 the British government met with army intelligence and army personnel, between them they created a blue print which was first called operation carcan to later be changed to operation motorman. In this secret meeting that place on the 4th of July, the army were to take 20,000 troops from the UN forces, and the government gave orders on a shoot to kill policy and confirmed that no soldier would be held accountable for their actions on that day. Over 1,500 of these soldiers and 300 centurion tanks were sent to free Derry to tear down the barricades and cause havoc, but the provisional IRA intercepted their blue print and decided to step down to protect the innocent people of Northern Ireland. It was 4:10am, there were 25 – 30 people at the Creggan shops when there was gunfire heard, Vol. Seamus Bradley unarmed drew attention to himself to save others. He ran down Bishop field where a soldier was to get out of a saracen, take aim in a kneeling position and fire two shots hitting him in the back, Vol. Seamus Bradley fell. Then the saracen drove down the field to where he lay, they put him in the saracen and took him away to St. Peter’s school, no one knew what happened after that. All they know is that he was interrogated, the pictures tell their own story. He was shot again three more times at close range, he was tortured and beaten and left to bleed to death at the hands of the British army. Afterwards it was confirmed by a doctor that none of Seamus Bradley’s injuries have been life threatening and had he received medical aid he would have lived.
This memorial is to commemorate Vol. Seamus Bradley just yards from where he fell. Vol. Seamus Bradley on the 2nd Battalion of B company Oglaigh Na H-Eireann, even though he was shot five times and beaten they could not make him betray his comrades. I lived and loved and laboured with a patriot’s heart and will that the dawning years might make you fearless and unfettered still. When a future age shall find thee free men stand by thy side Mother Ireland o” remember me. They may kill our bodies and take our blood but they will never break our spirits. killed on active service beirigi bua