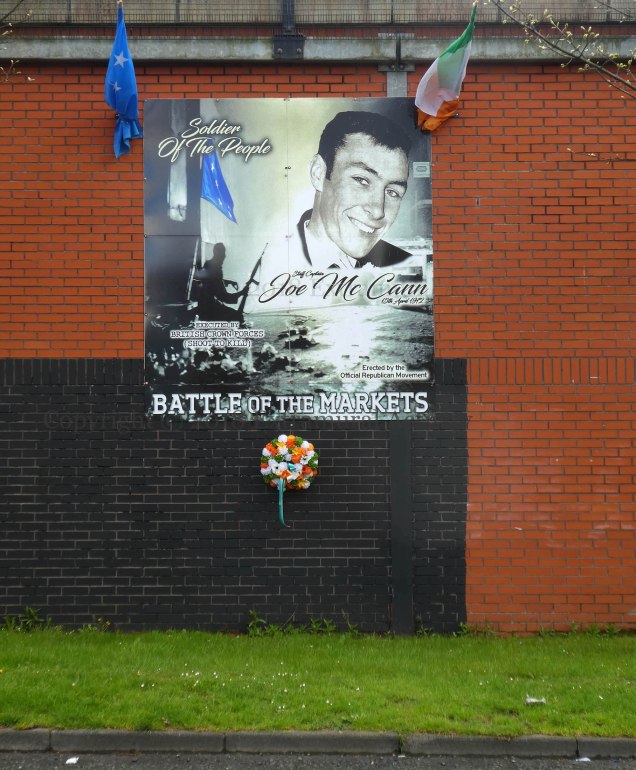 Internment (imprisonment without trial) was introduced on August 9th, 1971 by NI Prime Minister Brian Faulkner, with 342 people arrested on the first day. The Bogside was “hysterical with hated”, according to Eamonn McCann (History Ireland) and of Belfast Kevin Myers wrote “Insanity seized the city.” Two dozen people would die in the rioting and gun-battles that followed, leading to the suspension of Stormont rule (WP). In the Markets area, OC Joe McCann and other (Official) IRA volunteers took over the Inglis bakery and reportedly prevented 600 British troops from entering the area – the image to the left of the board above is a Ciaran Donnelly photograph showing McCann during the battle, kneeling beneath a Starry Plough and holding an M1.
For information on his death the following year, see Joe McCann.
Click to enlarge (to 1816 x 2200)
Copyright © 2018 Extramural Activity
Camera Settings: f4.2, 1/80, ISO 80, full size 3614 x 4379
text: X04933 soldier of the people erected by the official republican movement