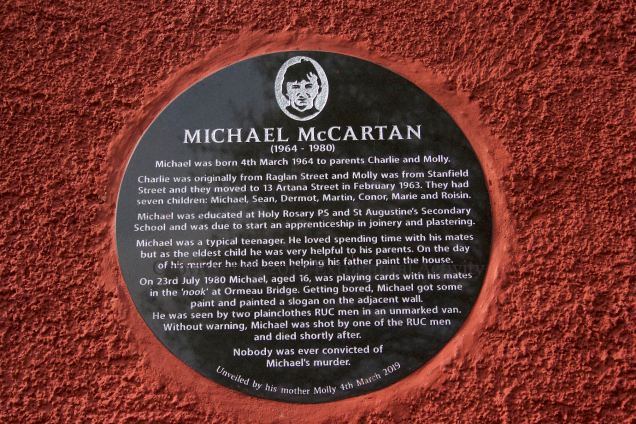 “Michael was born 4th March 1964 to parents Charlie and Molly. Charlie was originally from Raglan Street and Molly was from Stanfield Street and they move to 13 Artana Street in February 1963. They had seven children: Michael, Sean, Dermot, Martin, Conor, Marie and Roisin. Michael was educated at Holy Rosary PS and St Augustine’s Secondary School and was due to start an apprenticeship in joinery and plastering. Michael was a typical teenager. He loved spending time with his mates but as the eldest child he was very helpful to his parents. On the day of his murder he had been helping his father paint the house. On 23rd July 1980 Michael, aged 16, was playing cards with his mates in the ‘nook’ at Ormeau Bridge. Getting bored, Michael got some paint and painted a slogan on the adjacent wall. He was seen by two plainclothes RUC men in an unmarked van. Without warning, Michael was shot by one of the RUC men and died shortly after. Nobody was ever convicted of Michael’s murder. Unveiled by his mother Molly 4th March 2019.” Father Raymond Murray, who with Fr Dennis Faul wrote a report on McCartan’s death, was also at the launch.

The killing of Michael McCartan by an RUC officer named McKeown was long ago (in the 1980s) depicted in a mural in Oakman Street: They Murder The People And Have No Shame.