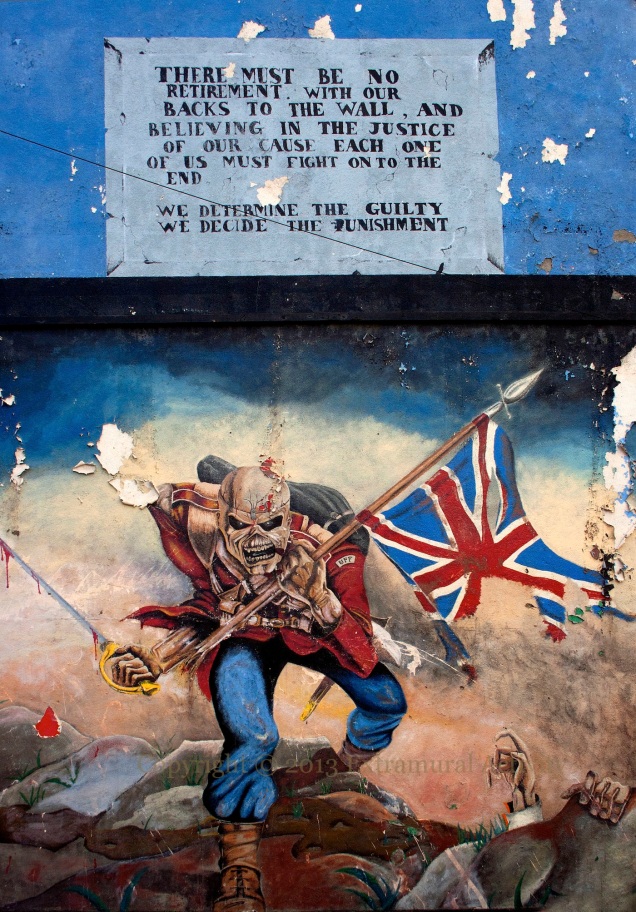 One of loyalism’s most famous muraling icons – paradoxically of the peace-time era – is Eddie The Trooper. This one is in the Waterside’s Bond’s Place, London-/Derry/Doire. For others in other locations, see Eddie’s Visual History page.

The first part of the words above the board come from the last paragraph of this WWI order: “There must be no retirement. With our backs to the wall and believing in the justice of our cause each one of us must fight on to the end”.

The last sentence of Haig’s order is not included; instead we here have “We determine the guilty. We decide the punishment.” which appears to be the motto of a “fantasy tabletop war game” Warhammer 40,000.

The image is a 1997 (according to Peter Moloney) replica, with additions, of a 1983 Iron Maiden cover (WP). This character, “Eddie”, was featured in much of Iron Maiden’s artwork. The two images below show a close-up of Eddie, now sporting a UFF badge on his shoulder, and of the victim on the left, now wearing a distinctively gold coloured epaulette to go with his green uniform and white sash. 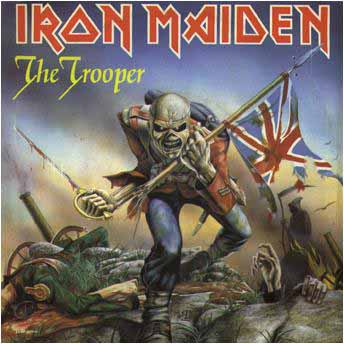 The board was painted by a group called ‘Attitude Artwork’, made up of Dee Logan, Mark Logan, and Marty Edwards (CAIN). In an interview with the BBC, Marty Edwards said, “I work for Attitude Mural Artists. We’re based in the Waterside, Londonderry and we paint predominantly Protestant paintings. We would usually paint paramilitary paintings for UDA people, UVF people in their own estates. You know, sort of to mark their territory bounds like, you know, stuff like that. Usually we’re left to our own devices, to come up with something that’s really intimidating, will antagonise Catholics. But this project I’ve been involved with two groups from both sides of the community, four schools. … ” (BBC)

3 thoughts on “The Trooper”