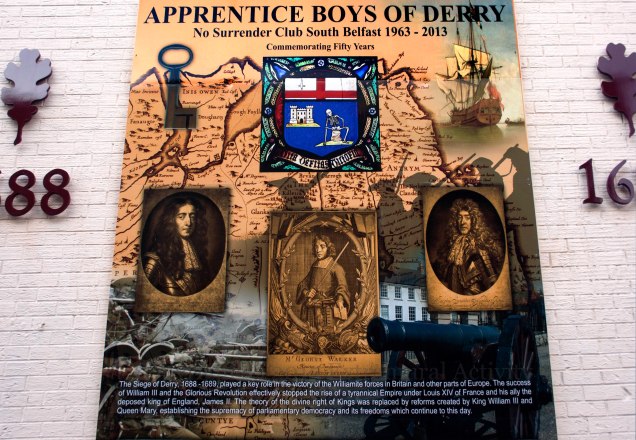 Oak Street is a fitting place for a mural about the Siege of Derry, as the oak leaf, shown to the left and right of the board above (and in the wide shot, below) is a symbol of the town, “doire” meaning an oak grove. The gates to the city were locked by thirteen apprentices, against the wishes of Governor Robert Lundy who wised to surrender the city. When the deposed king James II and his army arrived and demanded the surrender of the city of Derry, the cry from within was “No surrender!” The city was then besieged for 105 days until relief arrived in the form of ships of the navy of the newly crowned William & Mary.
The board shown above celebrates 50 years of the No Surrender Club South Belfast (1963-2013) a club affiliated with the Apprentice Boys Of Derry.
Click and click again to enlarge (to 3010 x 2084)
Copyright © 2015 Extramural Activity
Camera Settings: f8, 1/60, ISO 100, full size 3744 x 2592 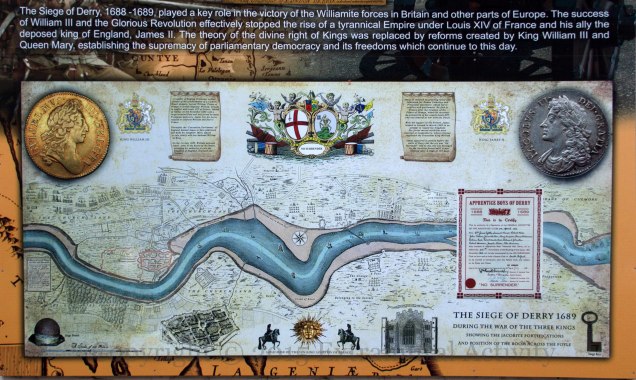 Click and click again to enlarge (to full size)
Copyright © 2015 Extramural Activity
Camera Settings: f8, 1/80, ISO 100, full size 3328 x 1992
text: X02674 X02675 X02676  The Siege of Derry, 1688 – 1689, April 18 to July 28 played a key role in the victory of the Williamite forces in Britain and other parts of Europe. The success of William III and the Glorious Revolution effectively stopped the rise of a tyrannical Empire under Louis XIV of France and his ally the deposed king of England, James II. The theory of the divine right of Kings was replaced by reforms created by King William III and Queen Mary, establishing the supremacy of parliamentary democracy and its freedoms which continue to this day. during the war of the three kings showing the jacobite fortifications and position of the boom across the foyle gold mask of the sun king vita veritas victoria protestant nobles stewart dynasty prince of orange convention parliament abdicated battle of the boyne kingdom of england scotland ireland londonderry toleration of roman catholics dissenters cousin dutch cituzens walls of derry but the cry was siege of 105 days duly initiated in apprentice boys’ memorial hall shutting of the gates rules and ritual roaring meg siege key