The McGurk’s Bar bombing of December, 1971 killed fifteen people – the most in a single incident during the troubles – capping what had already been a bloody year, including the “Ballymurphy Massacre” of July, in which 11 died, and starting another round of killings that would spread into the new year. Campaigners for an inquiry were busy this week in both Dublin and Belfast (Irish News).
The first nine panels of the ‘murdered’ follow to the right of the McGurk’s Bar board, presented here three-at-a-time. Note that the ninth panel (with Terry Enright in the top left) was previously the 11th panel; it is not clear why it has been moved left.
Click and click again to enlarge (to full size)
Copyright © 2015 Extramural Activity
Camera Settings: f6.3, 1/1600, ISO 800, full size 2492 x 2879 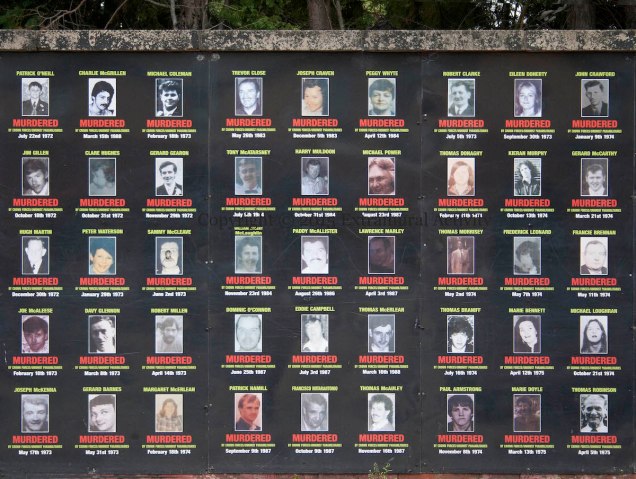 Click and click again to enlarge (to 1200 x 916)
Copyright © 2015 Extramural Activity
Camera Settings: f6.3, 1/800, ISO 800, full size 3396 x 2592
text: X02893 X02894 X02895 X02896
“At 8:47 pm on Saturday 4th December 1971, a no-warning bomb, planted by British terrorists, exploded on the doorstep of family-run McGurk’s Bar. Fifteen innocent men, women and children perished. Those who were not crushed or slowly asphyxiated by masonry where horrifically burned to death when shattered gas mains burst into flames beneath the rubble. Nearly the same again were dragged from the debris alive. In the aftermath of the atrocity, the British and Unionist Governments, RUC police force and British military disseminated disinformation that the bomb was in-transit and that the civilians guilty by association, if not complicit in this act of terrorism. This is despite a mountain of forensic evidence including a witness statement that saw the bomb being planted and lit before the British terrorists escaped into the night. From the moment the bomb exploded and for 40 years since, the families and friends of those murdered have campaigned constitutionally and with great dignity to clear the names of their lived ones. It is a Campaign for Truth that continues to this day. Join us at themcgurksbarmassacre.com” “

One thought on “Campaign For Truth”