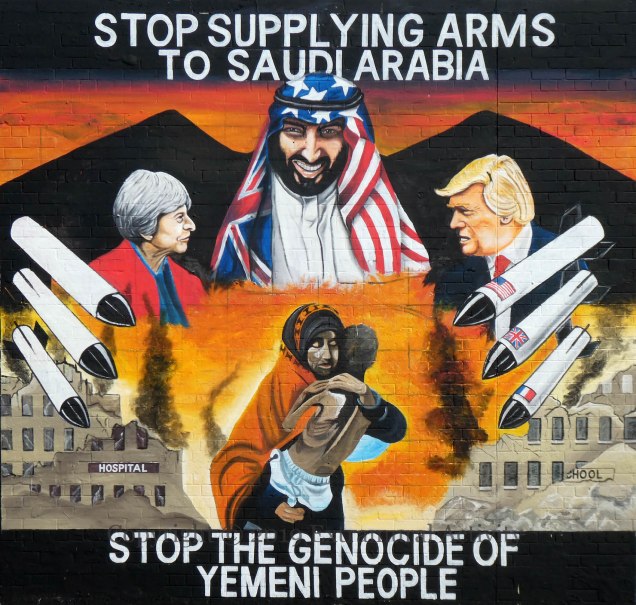 The United Nations in February called the humanitarian crisis in Yemen the worst in the world (UN) with famine and cholera affecting 18 million people (WP). According to UNICEF, a child is dying every ten minutes (UNICEF). The crisis results from the on-going civil war. Saudi Arabia (with arms, training, and intelligence support from the UK (Theresa May on the left next to Union Flag headscarf), the US (Trump on the right next to US flag headscarf), and France (French flag on the lowest missile) has conducted an air campaign to restore Abdrabbuh Mansur Hadi, who was driven from Aden in March, 2015, by Houthi forces. The Saudi intervention has been criticized for killing citizens and destroying infrastructure (WP), shown in the mural above by bombs falling on a hospital and a school. Update: UK sales were found to be illegal by the Court Of Appeal on June 20th, 2019 (BBC).
Click to enlarge (to 1700 x 1618)
Copyright © 2019 Extramural Activity
Camera Settings: f5.1, 1/800, ISO 80, full size 3720 x 3540
X06543 Divis St

One thought on “Stop The Genocide Of Yemeni People”