In the second image, below, Ewart’s mill, on the Ardoyne side of the Crumlin Rd, can be seen in the background. From the WP page on the Crumlin Rd … “The mill was built for William Ewart, a cotton trader and politician who switched his interests to the production of linen, which at the time became the leading industry in the city. During the Second World War the mill was converted from the production of linen to the manufacture of munitions.” There is a statue diagonally across the street (at the corner of Cambrai and Crumlin Roads) of a millworker. 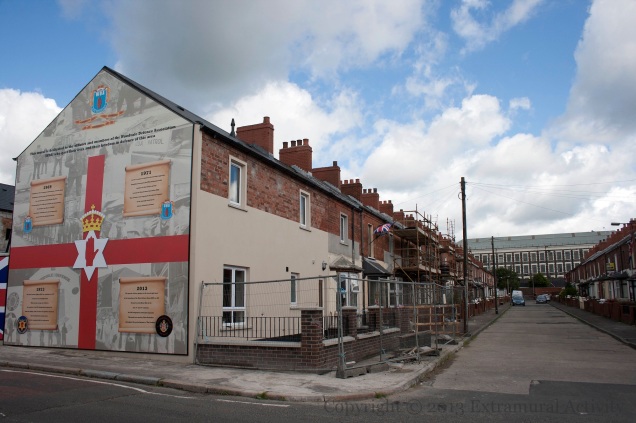 Click and click again to enlarge (to 2000 x 1333)
Copyright © 2013 Extramural Activity
Camera Settings: f8, 1/200, ISO 100, full size 3888 x 2592
text: X01258 X01260 Quis separabit. This mural is dedicated to the offices and members of the WDA who gave their lives and their freedom in defence of this area. Established in 1969 in response to indiscriminate sectarian attacks by republican murder gangs, the WDA has a proud history of defending the surrounding area. With the dedication and determination the members and officers of the WDA served their community in the face of unprovoked, unwarranted and cold-blooded attacks.
In 1971 in order to combat an increasingly aggressive republican movement, the WDA amalgamated with a number of other defence groups in form the UDA. This ensured a more organised and coherent response to the onslaught faced by the citizens of Northern Ireland.
The UFF was established in 1873 to take the war to republicanism. With tenacity, courage and resilience the members of the UFF distinguished themselves in battle by striking at the very heart of republican movement and ensuring that the attacks faced by their community didn’t go unanswered.
2013: The genesis of these groups can be traced right back to the formation of the UDU in 1893. Formed to resist Home Rule in the late 19th and 20th centuries, the UDU adapted the motto Quis Separabit. this motto was used by ulster defenders throughout the period known as “the troubles”.