This is the center of a mural in Canada Street depicting Protestant women and children on-board a steamer, the Ulster Queen, leaving Belfast because of rioting and headed for Liverpool, where they were hosted by local Orange families. A shot of the whole is below, as well as a close-up of the laminated letter of thanks to Elsie (Allen) Doyle, one of the organisers in Liverpool.
A very similar mural was in this spot several years ago (though not immediately prior to this one – the wall was blank), featuring three youngsters on the boat, rather than a mother and children. The panel to the right began “In August 1971 many Protestants fled their homes as the IRA launched a bitter sectarian attack on Protestant communities  throughout Belfast.” (See M04069.)
Click and click again to enlarge (to 2100 x 1628)
Copyright © 2013 Extramural Activity
Camera Settings: f8, 1/640, ISO 400, full size 4542 x 3522 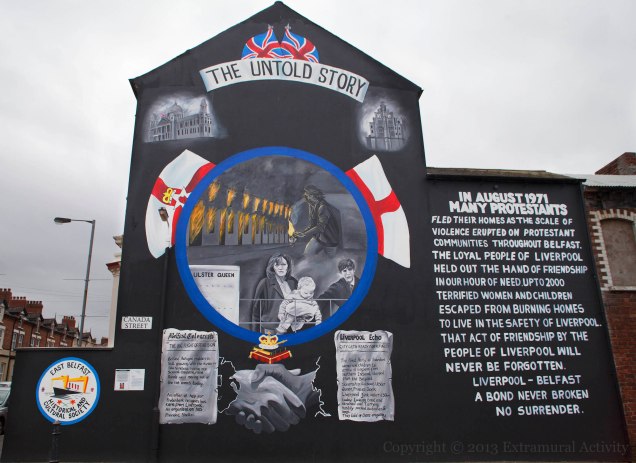 Click and click again to enlarge (to 1875 x 1250)
Copyright © 2013 Extramural Activity
Camera Settings: f8, 1/1600, ISO 400, full size 5616 x 3744
text: X01394 X01392 X01393 in august 1971 many protestants fled their homes as the scale of violence erupted throughout belfast the loyal people of liverpool held out the hand of friendship in our hour of need up to 2000 terrified women and children escaped from burning homes to live in the safety of liverpool that act of friendship by the people of liverpool will never be forgotten a bond never broken no surrender telegraph the big flight of fear is on refugee problem is still growing number of homeless running into several thousand moving out of riot areas echo city gets ready northern ireland steamship ulster queen princes dock just after 6.30 am tired and strained hastily packed suitcases told of there anguish elsie allen doyle the debt of gratitude owed to this lady cannot be measured sitting in liverpool she seen the plight of the protestant families having to flee their home some of them burning as a member of lily of north ladies l.o.l. 79 she decided something had to be done her husband & father-in-law traveled to belfast in august 1971 what she saw motivated her to think that people could come and stay these needed a break away from mayhem that was going on in the name of the republican cause started to make plans and phoned friends including the orange order the hand of friendship was being extended across the irish sea they would not be found wanting took over 900 no mean feat seen they were all housed and cared for god bless you grandchildren loyalist stretched out to us

2 thoughts on “The Untold Story”