Here is a mural in the Markets area of south Belfast celebrating the achievements of local boy George McMullen, who played youth football for St. Malachy’s and St. Matthew’s before joining Cliftonville in 2011 age 20.
On the left is the familiar Cliftonville huddle (see previously: The Red Army). The two poses in the centre and on the left are reproductions of Belfast Telegraph images. The first is from Cliftonville’s 2013 Dankse Bank Irish League-clinching win over Linfield, which the Reds won with a McMullen penalty in the dying seconds; the second in from the same moment in the 2014 campaign: Chris Curran has just scored to put the Reds two-nil up in a game against Portadown that would win them the League for the second year in succession.
Other Cliftonville players have been featured in murals: Joe The Goal in Ardyone and Rory Donelly both in the Bone.
Below is a shot of the piece in development and below that is a wide shot showing the mural’s location adjacent to the End The Siege On Gaza mural.
Click and click again to enlarge (to full size)
Copyright © 2014 Extramural Activity
Camera Settings: f8, 1/250, ISO 400, full size 3839 x 2508 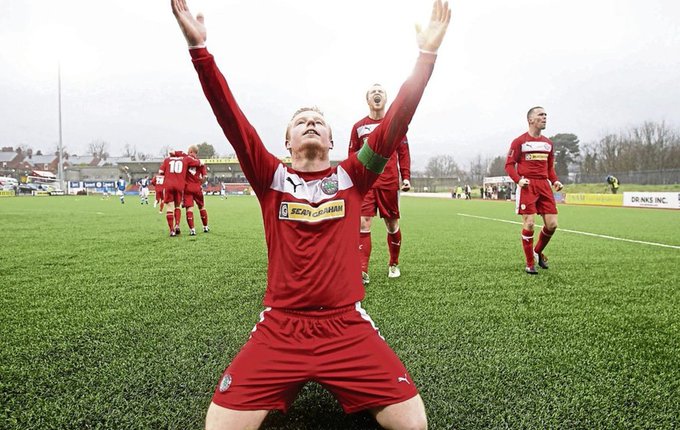