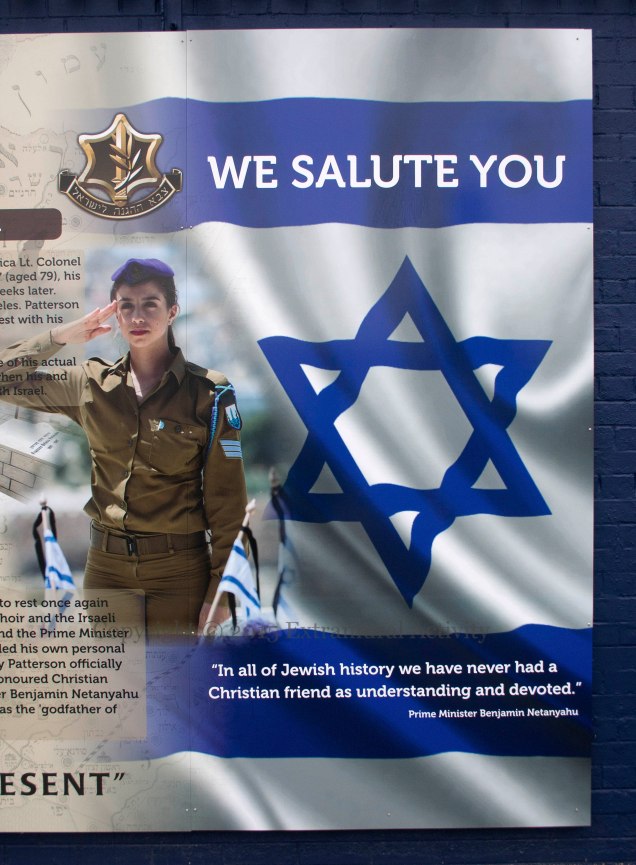 Here are panels 8, 5, 6, and 7 from the Patterson board featured yesterday. The final panel shows the star of David and a quote from Prime Minister Benjamin Netanyahu: “In all of Jewish history we have never had a Christian friend as understanding and devoted.” The interim panels described Patterson’s raising and leading of the Jewish battalions of the Royal Fusiliers in WWI. After dying in obscurity in Los Angeles in 1947, his remains were transported to Israel in December 2014 and reinterred (video). For more, including a recording of Patterson’s voice, see this BBC Magazine article.
Video of the launch:
[youtube https://www.youtube.com/watch?v=iTRY-OBMnjk]
Click and click again to enlarge (to full size)
Copyright © 2015 Extramural Activity
Camera Settings: f8, 1/250, ISO 400, full size 2592 x 3888 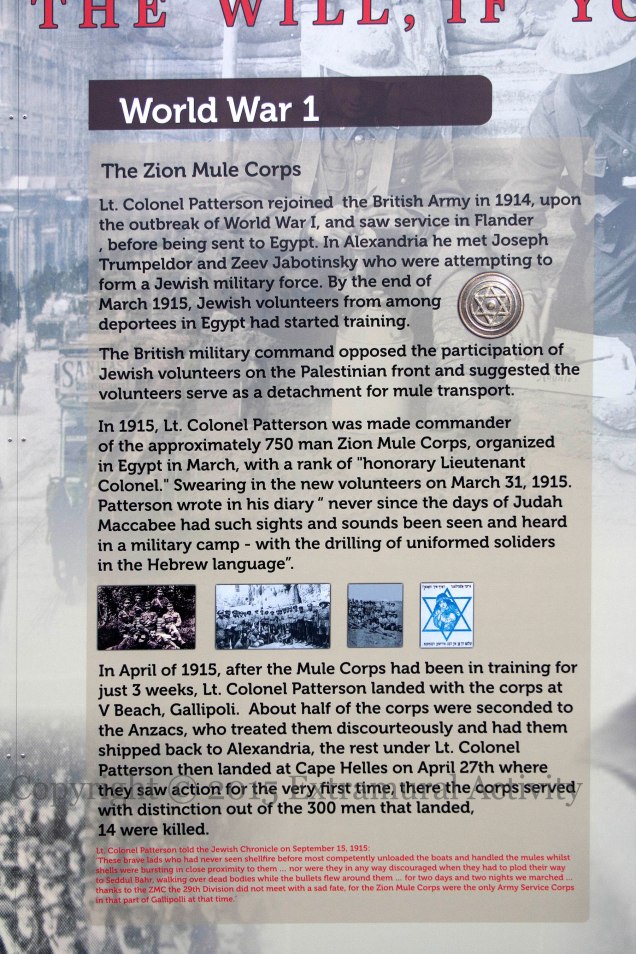 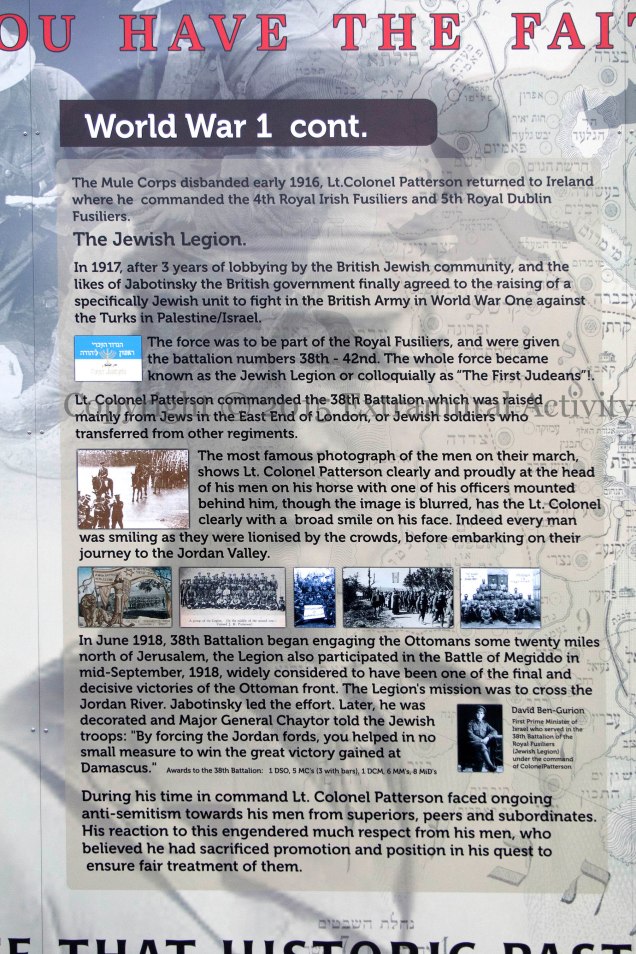 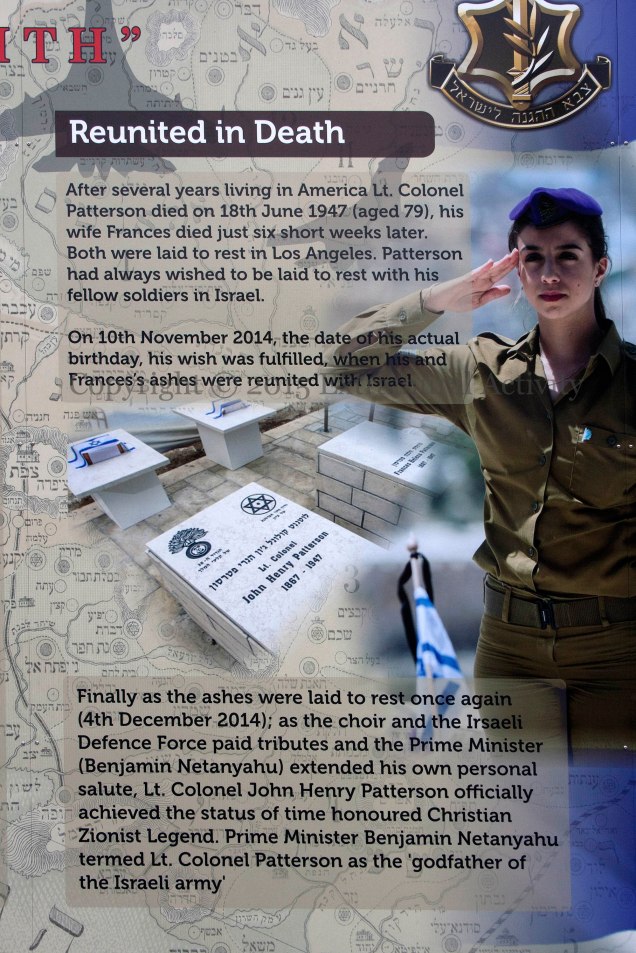 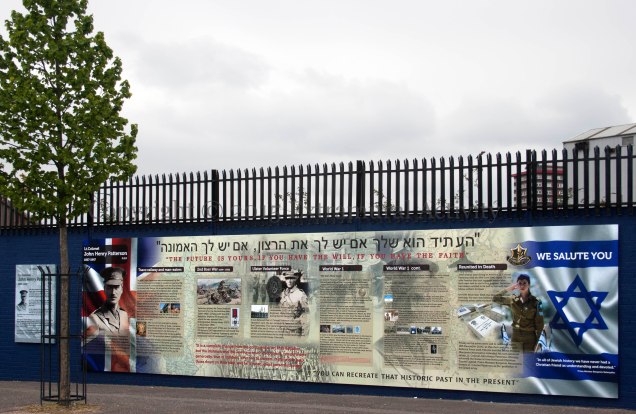 Click and click again to enlarge (to full size)
Copyright © 2015 Extramural Activity
Camera Settings: f8, 1/400, ISO 400, full size 3744 x 2400
text: X02621 X02618 X02619 X02620 X02622 The Zion Mule Corps. Lt. Colonel Patterson rejoined the British Army in 1914, upon the outbreak of World War I, and saw service in Flander[s] before being sent to Egypt. In Alexandria he met Joseph Trumpeldor and Zeev Jabotinsky who were attempting to form a Jewish military force. By the end March 1915, Jewish volunteers from among deportees in Egypt had started training. The British military command opposed to participation of Jewish volunteers on the Palestinian front and suggested the volunteers serve as a detachment for mule transport. In 1915, Lt. Colonel Patterson was made commander of the approximately 750 man Zion Mule Corps, organized in Egypt in March, with a rank of “honorary Lieutenant Colonel.” Swearing in the new volunteers on March 31, 1915. Patterson wrote in his diary “never since the days of Judah Maccabee had such sights and sounds been seen and heard in a military camp – with the drilling of uniformed soliders soldiers in the Hebrew language”. In April of 1915, after the Mule Corps had been in training for just 3 weeks, Lt. Colonel Patterson  landed with the corps at V Beach, Gallipoli. About half of the corps were seconded to the Anzacs, who treated them discourteously and had them shipped back to Alexandria, the rest under Lt. Colonel Patterson then landed at Cape Helles on April 27th where they saw action for the very first time, there the corps served with distinction out of the 300 men that landed, 14 were killed. The Mule Corps disbanded in early 1916, Lt. Colonel Patterson returned to Ireland where he commanded the 4th Royal Irish Fusiliers and 5th Royal Dublin Fusiliers. In 1917, after 3 years of lobbying by the British Jewish community, and the likes Jabotinsky the British government finally agreed to the raising of a specifically Jewish unit to fight in the British Army in World War One against the Turks in Palestine/Israel. the force was to be part of the Royal Fusiliers and were given the battalion numbers 38th-42nd. The whole force became known as the Jewish Legion or colloquially as “The First Judeans” The most famous photograph of the men on their march shows Lt. Colonel Patterson clearly and proudly at the head of his men on his horse with one of his offices mounted behind him though the image is blurred has the Lt. Colonel clearly with a broad smile on his face. Indeed every man was smiling as they were lionised by the crowds before embarking on their journey to the Jordan Valley. In June 1918 38th Battalion began engaging the Ottomans some twenty miles north of Jerusalem the Legion also participated in the Battle of Megiddo in mid-September  1918 widely considered to have been one of the final and decisive victories of the Ottoman front. The legion’s mission was to cross the Jordan river. Jabotinsky led the effort. Later he was decorated and Major General Chaytor told the Jewish troops “By forcing the Jordan fords, you helped in no small measure to win the great victory gained at Damascus. faced ongoing anti-semitism superios peers subordinates engendered much respect sacrificed promotion and position in his quest to ensure fair treatment of them several years living in American wife frances reunited with fellow soldiers zionist legend historic past in the present future is yours if you have the will faith aged 79 18th June 1947 buried los angeles david ben-gurion we salute you

3 thoughts on “Godfather Of The Israeli Army”

Leave a Reply to An Sionnach Fionn Cancel reply