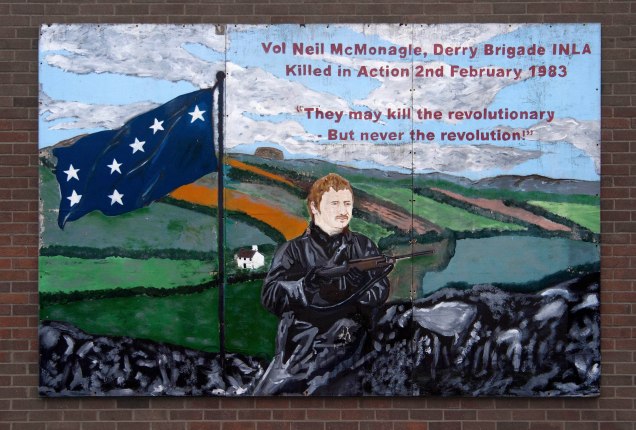 The mural above to INLA volunteer Neil McMonagle is in Leafair Park, Derry, where McMonagle, aged 23, was shot dead by undercover British soldiers on February 2, 1983. It shows an armed McMonagle behind a stone wall with a Plough In The Stars flag with a blue background, with the view towards Buncrana (perhaps).
“Vol Neil McMonagle, Derry Brigade INLA. Killed in action 2nd February 1983. “They may kill the revolutionary but never the revolution.””
For an obituary see this IRSP Derry page.
Click and click again to enlarge (to full size)
Copyright © 2015 Extramural Activity
Camera Settings: f8, 1/500, ISO 400, full size 3737 x 2530
text: X02864 londonderry