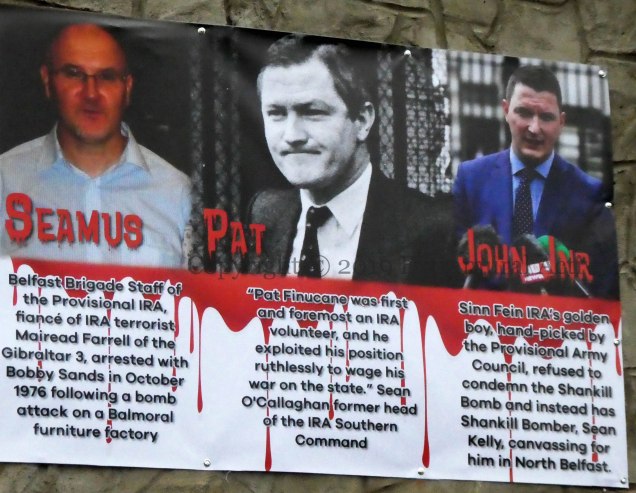 We are now a week away from Westminster elections (December 12th). John Finucane is standing for Sinn Féin in Belfast North but this banner is at the top of the Shankill, intended to stir up animosity towards Sinn Féin, and support for DUP candidates, in all constituencies.

The same banner was hung in Tigers’ Bay, York Street, Antrim, and Ballymena, though the Tigers’ Bay one was removed because it was on council property (News Letter).

The banner presents a gallery of Finucane’s relatives John Snr, Dermot, Seamus, and Pat: “The real Finucane family  – human rights abusers – steeped in the blood of our innocents.” The (former) IRA involvement of the three uncles is well documented. Controversially, Sean O’Callaghan (in the Daily Telegraph) alleged that father Pat Finucane was in the IRA, contrary to the findings of the de Silva report into collusion: “Pat Finucane was first and foremost an IRA volunteer, and he exploited his position [as a solicitor with access to prisoners] ruthlessly to wage his war on the state.” The source of the claim that Finucane is the chosen candidate of the PIRA Army Council is unknown. Sinn Féin leader Mary Lou McDonald called the banners “dangerous” (RN). The Belfast Telegraph reported that the Shankill banner was ordered by an alleged planner of Pat Finucane’s assassination, Jim Spence of the UDA (BelTel).