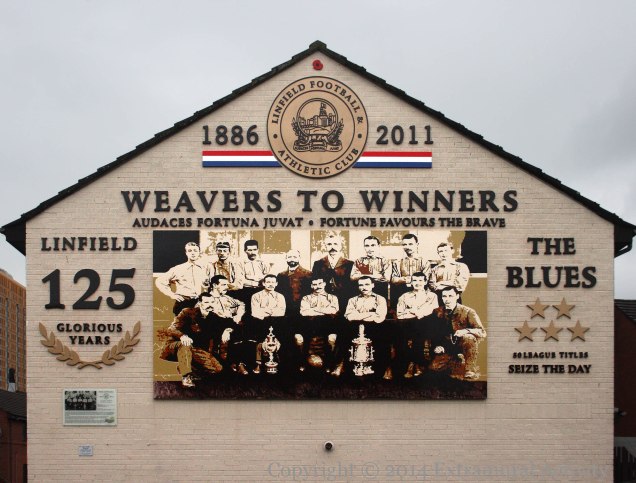 “Weavers To Winners” – Linfield Football And Athletic Club was founded in 1886 by workers at the Ulster Spinning Company’s Linfield mill and they became Irish League champions in the 1890-1891 season. The names of the players in the photograph are given in the shot of the information plaque, below. The work was designed by Ross Wilson.
Click and click again to enlarge (to 3028 x 3200)
Copyright © 2014 Extramural Activity
Camera Settings: f8, 1/400, ISO 800, full size 3528 x 2680 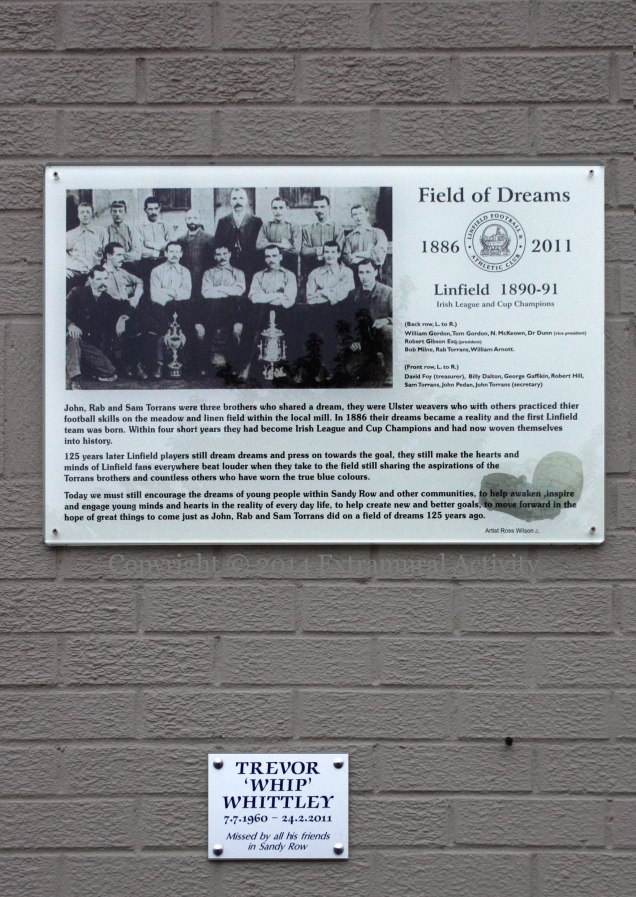 Click and click again to enlarge (to full size)
Copyright © 2014 Extramural Activity
Camera Settings: f8, 1/320, ISO 800, full size 2396 x 3380
text: X03004 X03005 Audaces fortuna juvat 50 league titles trevor whip whittley 7-7-1960 24.2.2011 missed by all his friends in sandy row william gordon tom gordon n. mckeown dr. dunn robert gibson esq (president) bob milne rab torrans william arnott david foy treasurer billy dalton george gaffikin robert hill sam torrans john pedan john torrans secretary john rab and sam torrans were three brothers who shared a dream they were ulster weavers who with others practiced their football skills on the meadow and linen field within the local mill in 1886 their dreams became a reality and the first linfield team was born within four short years they had become irish league and cup champions and had now woven themselves into history 125 years later players still dream and press on towards the goal they still make the hearts and mind of fans everywhere beat louder when they take to the field still sharing the aspirations of the brothers and countless others who have worn the true blue colours today we must still encourage the dreams of young people within sandy row and other communities to help awaken inspire and engage young minds and hearts in the reality of every day life to help create new and better goals to move forward in the hope of great things to come field of dreams