The Tullygarley mural in Larne, originally painted by Caroline Jeffrey, has been replaced with a computer-generated version reproducing most of the images. The bleaching green is gone; the Black Arch has been added, as has part of the mural that was on this site three generations of murals ago: God Save The Queen.
From the info-board for the previous version, included below:
“Tullygarley” means “Hillock of the Grey Calf” – thus the grey calf grazing with the cows.
The 36th Ulster Division – In September 1914 the Ulster Division was formed from the Ulster Volunteer Force which raised thirteen battalions for the three Irish regiments in Ulster.
Bleaching Green – Linen laid out in fields to bleach. The Bleaching Factory interior depicts the Bleaching process. (The building is currently derelict.) Blue Flax Flowers are the national floral emblem of Northern Ireland.
Local Primary School, Inver and Larne, known locally as “the Bridge”, as it looked in the 1930’s with the Inver River running through it. The bridge that the school was named after no longer exists.
Linen Factory of Glyn [Glynn] Road (no longer exists, site of abandoned garage) with inset depicting workers with weaving machines (circa 1924).
The old Tullygarley playground (mural site) with the Fountain in the foreground, and rows of houses on either side (Glynn Road and South Circular Road).
Sun Laundry Van. Sun Laundry showing people working inside (now Rea’s Furnishings, Bank Road).
Larne Lough – it is an area of special interest, a special protection area and a Ramsar site in order to protect the wetland environment.
SS Clyde Valley – launched in July 1886. Was used in 1914 to transport arms from Hamburg to Larne.
Roseate Tern – Larne Lough is the only breeding colony in Northern Ireland for the Roseate Tern, one of the UK’s rarest birds.
Click and click again to enlarge (to 2000 x 2062)
Copyright © 2015 Extramural Activity
Camera Settings: f8, 1/320, ISO 100, full size 3562 x 3672 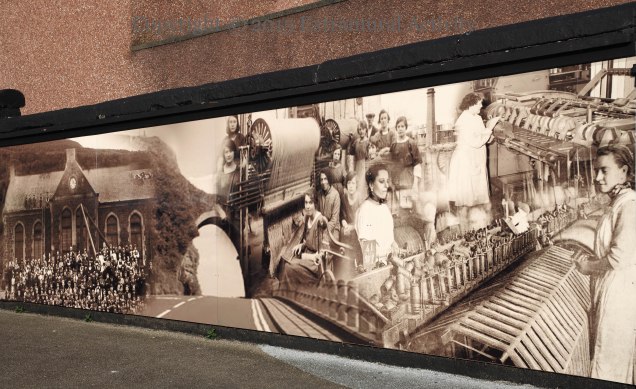