The mural featured today (above and three shots below) has a dual purpose. On the one hand, it is part of celebrations marking the 75th anniversary of the Battle Of Britain, which was waged from July to October in 1940. On the other, it is part of an anti-racism project, celebrating in particular the contributions to the Battle made by roughly 145 Polish aviators (WP) and especially the 303 squadron: “The Polish nation – part of us then, part of us now”. The 303 was later stationed in Northern Ireland for a time. (BBC-NI)
The artist is Ross Wilson. The colour version of the central photograph is available at the Housing Executive’s write-up of the project. Other reports: Belfast Live | NewsLetter
Video of speeches from the launch:
Click and click again to enlarge (to full size)
Copyright © 2015 Extramural Activity
Camera Settings: f7.1, 1/100, ISO 400, full size 3352 x 1712 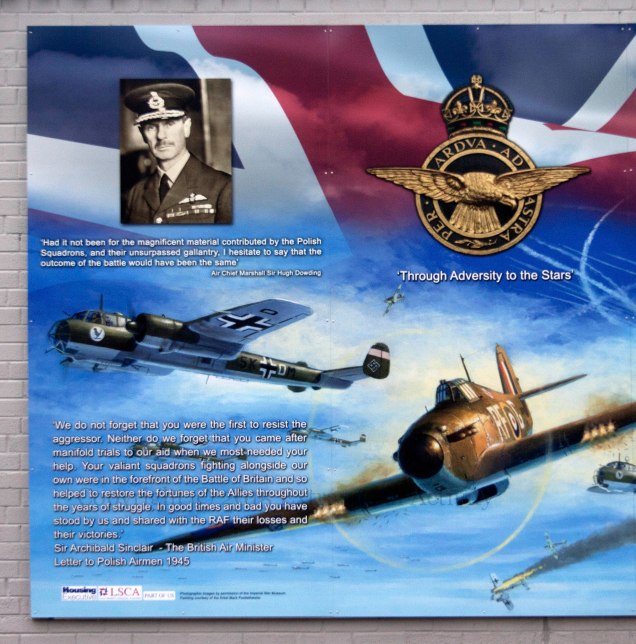 Click and click again to enlarge (to full size)
Copyright © 2015 Extramural Activity
Camera Settings: f6.3, 1/125, ISO 400, full size 3496 x 1008
text: X02994 X02995 X02996 X02997 churchill never in the field of human conflict was so much owed by so many to so few 21st august 1940 after the invasion of poland by germany on september 1st 1939 many young polish airmen made their way to britain the luftwaffe had full control of the skies over poland and any attempt to fight there would have been futile a rapidly modernising royal air force was an attractive alternative especially as they had been equipped with the ultra-modern spitfire and hurricane fighter planes with a shortage of experienced pilots polish airman became the largest group of non british personnel in the RAF during the battle of britain they joined already established squadrons in fighter command however on july 13th they were given their own squadrons one of these was the highly successful 303 polish squadron during the battle destroyed more aircraft than any other fourth highest tally of all 2nd world war shot down 20% of all experience of seeing their homeland at the mercy of the german forces hardened their resolve regarded by fellow pilots as highly focused and courageous josef frantisek highest scoring fighter ace had it not been for the magnificent material contributed and their unsurpassed gallantry i hesitate to say that the outcome of the battle would have been the same air chief marshall sir hugh downing per ardua ad astra we do not forget that you were the first to resist the aggressor neither do we forget that you came after manifold trials to our aid when we most needed your help your valiant fighting alongside in the forefront helped to restore the fortunes of the allies throughout the years of struggle in good times and bad you have stood by us and shared their losses and their victories sir archibald sinclair british air minister letter to polish airmen 1945 general sikorski honours rations outside their mess hut john alexander kent feric grzeszcczak zumbach lokuciewski hennerberg daszewski szaposznikow from this day to the ending of the world we in it shall be remembered we few we happy few we band of brothers for he today that sheds his blood with me shall be my brother henry V william shakespeare the legend of 303 polish squadron they gave their lives high up there somewhere where earthly matters are so distant the rays of the sun so pure and god so close we must wonder if mankind is yet aware of the credit that is their due pete bleakley ross wilson housing executive lower shankill community association