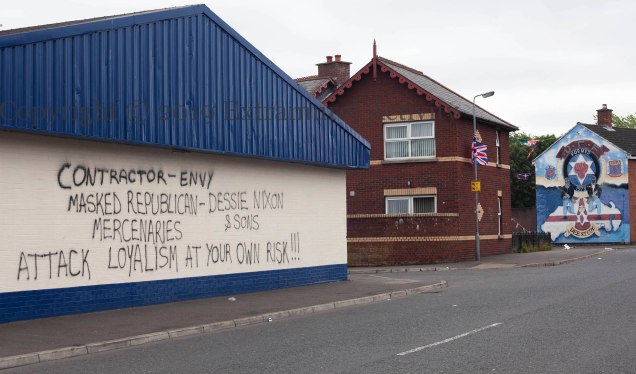 The Strategic Policy and Resources Committee of Belfast City Council decided on the 8th to remove two east Belfast bonfires built on council-owned land, carparks at the Avoniel leisure centre and in Ashdale Street, after staff arriving for work reported being threatened (BBC), perhaps by bonfire-builders reacting to the removal of tyres in Lismore Street (ITV) (see A Vote For The IRA). In response, builders of the Avoniel pyre removed its tyres, lowered its height, and moved it further away from buildings, but the Council affirmed its decision. A crowd of about 400 gathered to protect the site on Tuesday evening (BBC) and barricaded the site. The graffiti shown above appeared, calling contractors “masked republican mercenaries” and vowing that if they interfered they would “Attack loyalism at your own risk!!!” On Wednesday (1oth) the Council committee again affirmed its decision (Ailerain) but expressed concern over information of possible UVF involvement (Belfast Live) supplied in a letter from the PSNI (Mark Simpson).  (The mural is the background is a UDA one. See Northern Island.) The barricades were removed on Wednesday (as the image below shows). A contractor hired to remove the fire pulled out (BBC) on Wednesday evening. A “cultural celebration” was held throughout the night (BelTel).
The Ashdale Street fire was moved to a different location, near the Oval (BBC) and was set alight last night (BelTel).
Click and click again to enlarge (to 2100 x 1238)
Copyright © 2019 Extramural Activity
Camera Settings: f8, 1/125, ISO 100, full size 4860 x 2760 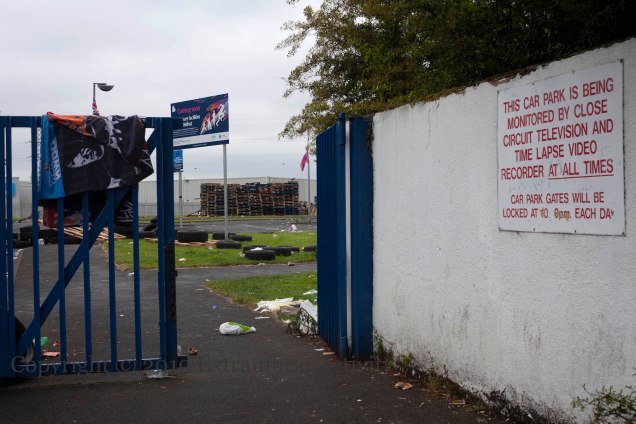