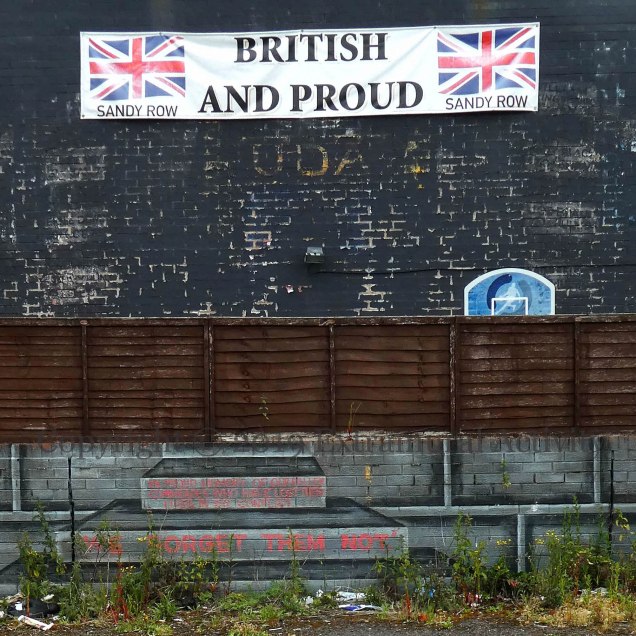 The UDA roll of honour mural (led by John McMichael) in Rowland Way was blacked out in the mid-2000s but has been gradually reappearing since then. (The steps painted on the wall in front read “In proud memory of our fallen comrades who lost their lives in the conflict – we forget them not.”) The banner was used for the “flag protests” surrounding the flying of the Union Flag on Belfast City Hall (in 2012-2013) and then was first hung next to the King Billy mural at the bottom of the Row.
Click to enlarge (to full size)
Copyright © 2019 Extramural Activity
Camera Settings: f3.5, 1/100 ISO 80, full size 1812 x 1812 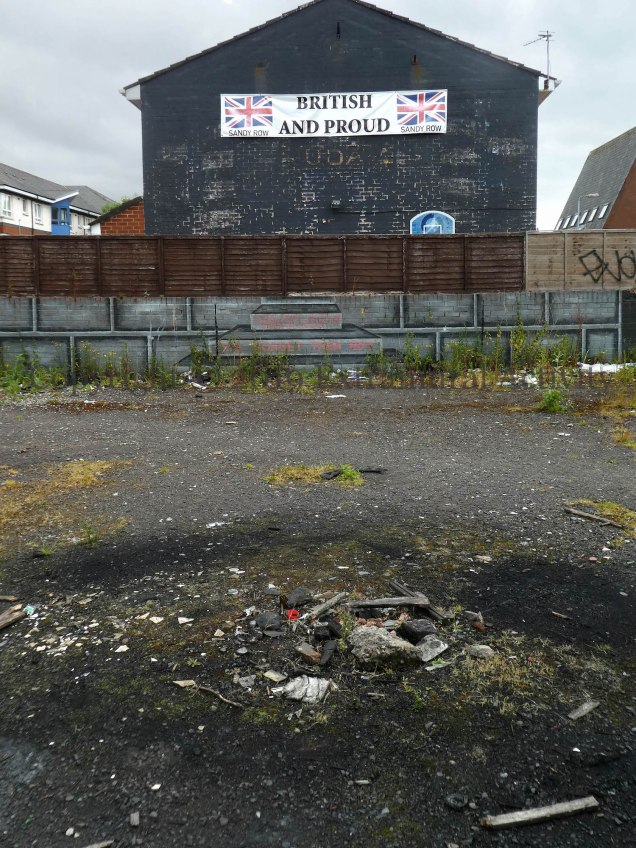 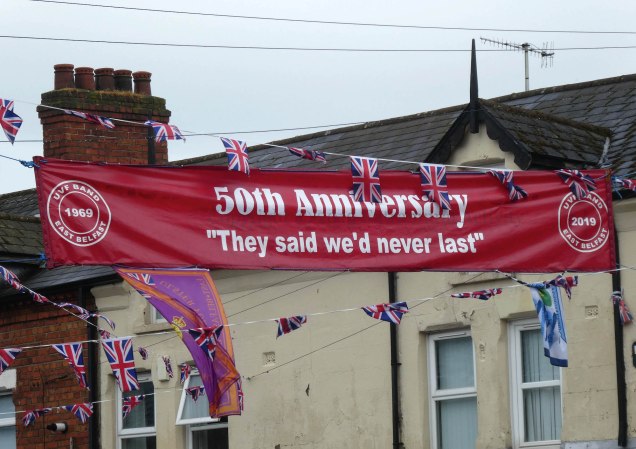 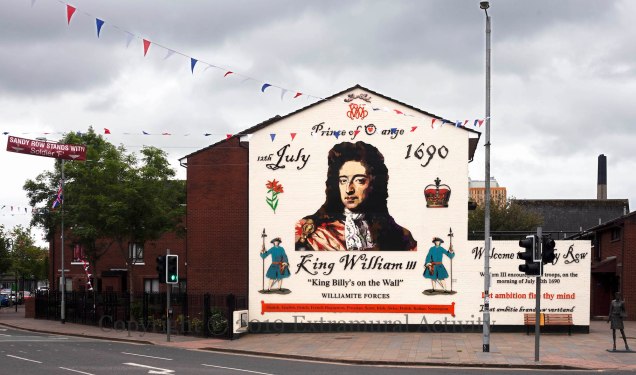 “Sandy Row stands with Soldier F” of the Parachute Regiment, who admitted (to the Saville inquiry) firing 13 shots in Derry on Bloody Sunday, and has now been charged with the killings of James Wray and William McKinney. For more information see Stop The Witch-Hunt.
Click to enlarge (to 2000 x 1180)
Copyright © 2019 Extramural Activity
Camera Settings: f8, 1/125, ISO 100, full size 5412 x 3192
X06627

Tonight’s second round of performances in the Eurovision Song Contest sees the Irish entry take the stage. (The UK’s song has a bye into Friday night’s finals.) The competition is taking place in Tel Aviv, Israel, which has prompted the BDS movement to urge a boycott of the event. Among those lodging a protest are Gael Force Art, who took to Sliabh Dubh last weekend with a large Palestinian flag. Article 11 of UN Declaration 194 asserts that refugees displaced by the 1948 Arab-Israeli war should be able to return home.
Click to enlarge (to 2000 x 1412)
Copyright © 2019 Extramural Activity
Camera Settings: f8, 1/640, ISO 200, full size 3672 x 2592

Various other murals pay tribute to the 10th and 16th Irish divisions alongside the 36th division (see, e.g., We Are The Dead Brothers In Arms | Killed Wounded Missing | Their Only Colour Was Khaki) but this tarp outside the Whiteabbey British Legion (Fb) shows instead the eight regiments raised in Ireland, whose battalions served not only these three but many other divisions: Royal Irish Rifles, Royal Inniskilling Fusiliers, Royal Irish Fusiliers, Connaught Rangers, Leinster Regiment, Royal Dublin Fusiliers, Royal Irish Fusiliers [should be Royal Irish Regiment], Royal Munster Fusiliers. The geographical distribution of the regiments (royal-irish.com has a map of the recruiting districts in Ireland; for battalions, divisions served, and regimental headquarters, see WP.) The background image is of the 36th in their trenches at the Battle Of The Somme.
Click and click again to enlarge (to 1650 x 1216)
Copyright © 2019 Extramural Activity
Camera Settings: f5.2, 1/80, ISO 100, full size 4380 x 3228 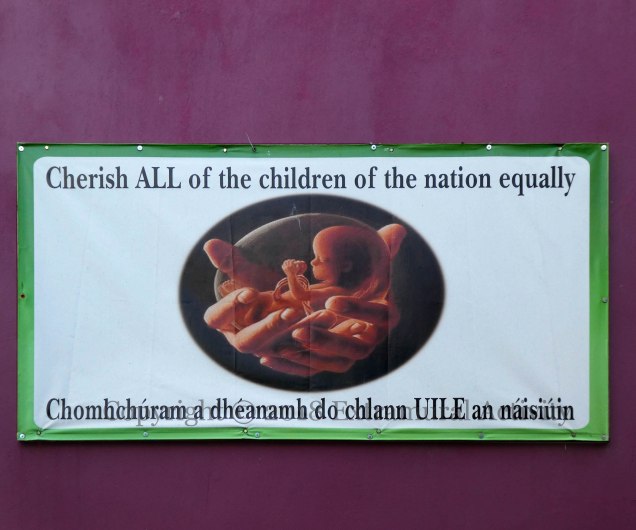 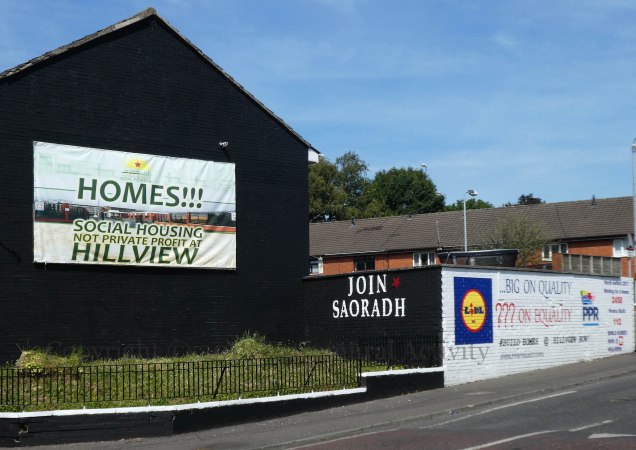 Hillview is the – currently vacant – 11-acre area on the Crumlin Road between Woodvale and Ardoyne, formerly the site of a Dunnes store. In August of 2017 the City Council voted to allow the site to be redeveloped as a shopping centre (Belfast Live | BelTel). The possibility of using the site for housing has been pressed by PPR (see Lidl On Quality and various Build Homes Now posts); the tarp shown above is sponsored by Saoradh, who took up the cause in September.
Click to enlarge (to full size)
Copyright © 2018 Extramural Activity
Camera Settings: f9, 1/320, ISO 400, full size 3888 x2592
text: X04945 ardoyne ave 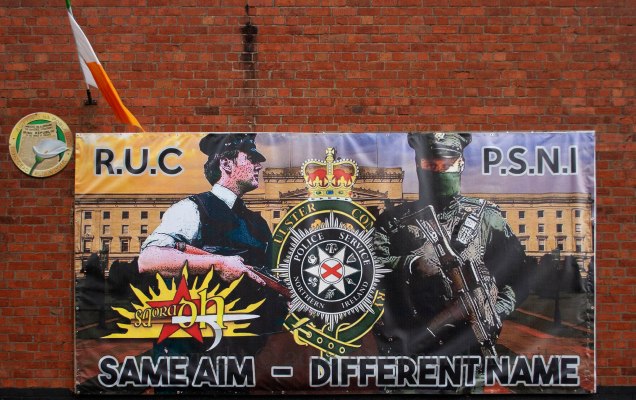 The Royal Ulster Constabulary (RUC) was reformed in 2001 as the Police Service of Northern Ireland (PSNI), as recommended by the Patten Commission. This Saoradh (web | Fb | tw) tarp in Hugo Street questions the extent to which the force has changed. The traditional RUC officer in bullet-proof vest is on the left; the modern officer on the right is more heavily protected. In the centre, the PSNI emblem overlays the old RUC one, with Stormont in the background.
For the board celebrating the 100th anniversary of the Easter Rising, see versions in Andersonstown | Ardoyne | St James.
Click to enlarge (to 2400 x 1510)
Copyright © 2018 Extramural Activity
Camera Settings: f8, 1/1000, ISO 800, full size 3647 x 2295
text: X04934 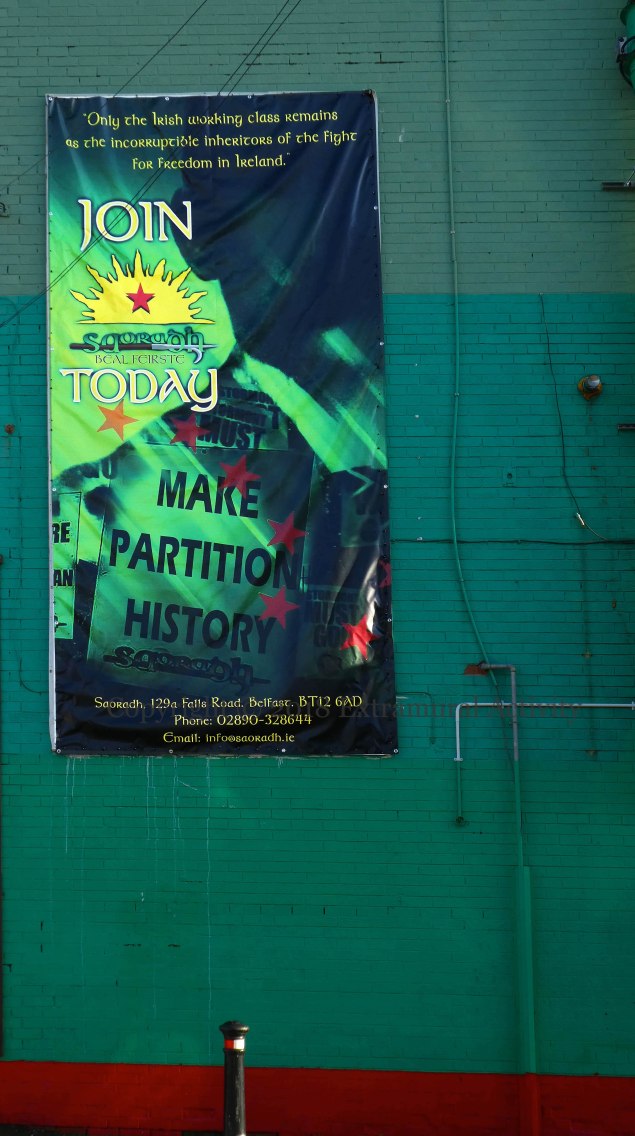 The Thames Street wall of Salvezza’s pizzeria doesn’t allow for full murals because of a giant flue, but Saoradh (web | fb) are making the most of the space with long vertical tarps. The quote on the tarp above (new for 2018) is from James Connolly, from his foreword to Labour In Irish History: “Only the Irish working class remains as the incorruptible inheritors of the fight for freedom in Ireland.”
The tarp that hung for most of 2017 is included below.
Click and click again to enlarge (to full size)
Copyright © 2018 Extramural Activity
Camera Settings: f4.1, 1/200, ISO 80, full size 2696 x 4816